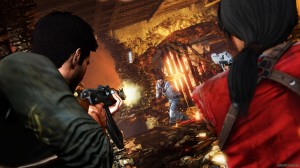 Access to the Uncharted 2 multiplayer beta was granted through contests, pre-orders and special consideration from the Game Advisory Panel. I didn’t get in through any of those; I got in through the kindess of strangers. It is what I expected. It’s Uncharted’s cover system, shooting mechanics and fluid animation put through multiplayer paces. And I liked it.

Team deathmatch and Plunder (Uncharted 2’s CTF) made up the game’s ten player competitive multiplayer offerings while a cooperative chapter pitted three heroes against waves of mercenaries. Both game modes played as expected. The cooperative sample comprised of a series of firefights; clear the area and move on.

Competitively, Uncharted 2 reminded me of a blend of Gears of War and Call of Duty 4. It does have a perks and ranking system with plenty of cover based pop n’ shoot. But given the organic nature of Uncharted, there’s a distinct feel to the shooting and movement which sets it apart from the pack. There were more options with the added verticality of the maps and ledge based cover.

I was pleased with Naughty Dog’s decision to scrap the rhythmic melee combat of the original Uncharted in favor for a more direct approach — or at least for the multiplayer. In multiplayer, I expect actions to have immediate effects and Uncharted 2 delivers that. I was also very pleased to see that screen tearing issues from the past were eradicated. Beautiful game.

Uncharted 2 is expected to arrive in November 2009, so why do we have the multiplayer beta six months out? Perhaps they really want the multiplayer to become a legitimate component. If that’s the case, they won’t mind some feedback and, to be honest, I only have one: add audio cues for when the treasure in Plunder is picked up, dropped or scored. That’s it. There’s already a party mode, voice chat muting options and easy menu navigation. Any other issue I have with the game can be fixed between now and release

Aside from the slow matchmaking, forced restarts after exits and the rare lockup, the Uncharted 2 beta was a solid showcase. There’s quality fun to be had and if you’re a fan of Uncharted’s ways of doing things, you’ll find plenty to like with Uncharted 2’s multiplayer. But as great as all of this is, it’s the single player campaign that I’m looking forward to most.

Uncharted 2: Among Thieves will be available in November 2009. Visit the official website for more information.