I was ignorant of Sucker Punch’s pedigree. Thus, I viewed inFamous as nothing more than a generic third person, open world game with electric super powers as a gimmick. Oh, how wrong I was. I had no idea what these developers were capable of or how enjoyable an open world game could be. And I’m glad I didn’t because in the end, I was genuinely surprised with inFamous.

Too many games favor visual fidelity over framerate and they usually suffer because of it. But not inFamous! It may not sport the stratospheric visual quality of a Killzone 2, but it’s more than adequate. Framerate only strayed from the 30 FPS target when Cole was near fences, his natural enemy. To my delight, the game held itself together when he was flinging lightning bolts and exploding cars left, right and center. Go figure.

That’s the continuing trend of inFamous; get the important elements right, so minor foibles can be forgiven. The protagonist, Cole McGrath, wasn’t bogged down by overdone climbing animations. Instead he was given the ability to grab any ledge, enabling him to scale with speed and precision. I could go almost anywhere with Cole – if I see it, I can usually reach it. And like I said earlier, with well thought out decisions like this, it was easy to forgive the texture pop-ins, glitches and other anomalies common to games of this nature.

Even side missions – a point of weakness for many open world games – were handled well. Side missions repeated, but there was enough variation and shuffling that they never felt like a burden. Sucker Punch also stayed away from the tedium of transporting packages from one cornerof the city to another. It was ironic considering Cole’s occupation as a package delivery boy. 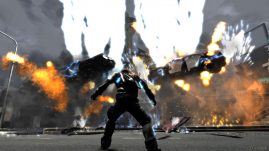 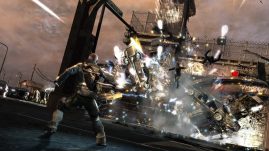 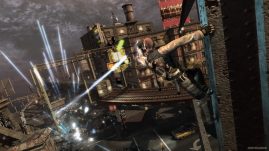 inFamous’ greatest strength lies within its controls. It’s responsive, easy to grasp and flexible. I was able to pull off  all sorts of attack and movement combinations. They even allowed combinations which required inhuman dexterity to pull off; the amount of freedom was refreshing.

In conjunction with the controls, every surface in the world behaved like a magnet; all I had to do was align Cole to the object, jump and get drawn in. There was no need to stress over missing jumps or slipping off roofs. And if I did manage to send Cole to a watery grave, the generous checkpoint system had me covered. I’ve been told that the platforming is very “Sly Cooper” and that’s how Sucker Punch have always done it — I guess years of refinement paid off because I loved it.

The stylish comic book panels sliced up the action and provided the motivations which drove Cole. I didn’t need them, but at least they were well done. To me, the unlocking of super powers, new districts and islands were all I needed to move forward. The origin story was simply icing on the cake which I didn’t really appreciate until the cliffhanger ending. There were different endings depending on which side of the morality fence I was on, but like other games with this mechanic: they differed slightly.

I enjoyed playing inFamous a lot. I’ve started my second run through the game and have decided to make it my first Platinum Trophy game ever. The length was ideal for multiple play-throughs and, most importantly, the core game itself was a lot of fun. This is how I want my open world games to be. Great controls, free flowing and just enough power to make me feel dominant, but not to the point of breaking the balance early on. Striking a perfect balance for one aspect of a game is difficult enough, but I felt inFamous achieved those balances in so many areas throughout. And that’s why I love it so.

For more information on inFamous, visit the official website.