Siren: Blood Curse was a jumbled, mind job of a game. A game like this shouldn’t have worked out. The controls were incredibly touchy and fell apart when I engaged more than one enemy. The story didn’t make a lick of sense until after the credits rolled and even then it required additional research to decipher it all. It’s a mystery and a surprise how this all collimated into one of the most satisfyingly scary games in recent memory.

SCE Japan Studio’s episodic Siren: Blood Curse is a reimagining of the PlayStation 2 “stealth” survival horror game. I’ve only heard of the title and half the genre which it belonged to (I didn’t know there stealth was involved). This digital download release sported updated visuals and a new cast of characters. Or so I’m told.

Each of the twelve episodes comprised of two acts played by one of the eight cast members. They blended that into a crazy tale of space-time continuum skipping and the result was non-stop confusion. People were dying in one chapter, coming back to life in the next and turning into zombies in another — all without explanation. Was it all a nightmare? I really didn’t know. There were tidbits of info hidden throughout the game, but I was too preoccupied with other things. Such as staying alive and keeping my shit together.

Siren gave me goosebumps; it’s one of the few games to do so. And it accomplishes this feat with unsettling music, haunting imagery and the most basic of game mechanics: mission objectives. These objectives dictated exactly what needed to be done in order to progress and removed the aimless wandering which would have otherwise diluted the experience. It kept the unknown fresh and left little room to ponder and dissect. 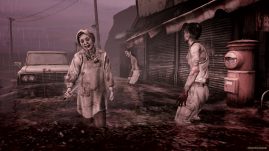 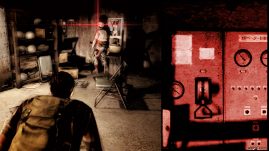 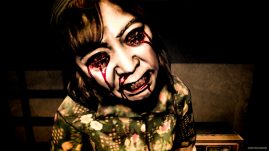 As I mentioned earlier, I didn’t realize stealth was supposed to play a significant part in Siren. I avoided the use of “Sight Jacking” — the ability to look through the eyes of the enemy — and chose to take on these Japanese zombies head on. It didn’t always work out (courtesy the lack of a lock on function), but it was decidedly better than going through the motions of trial and error with sneaking.

I also played the game entirely from the first person perspective. I found the third person angles terrible for the claustrophobic corridors and shacks found throughout this Japanese village. How the hell am I supposed to see the damn “spider” zombie  in front of my character if he’s blocking my view with his ass? Playing from this perspective also helped me acclimate myself to the unorthodox (by today’s standards) controls. As added bonuses, the game was scarier and I didn’t have to endure the stiff movement animations.

Reading my Siren: Blood Curse demo impressions from last year was quite the eye opener. I thought the controls were fine then, but find them cumbersome now. I also mistakenly believed that I could do without the explicit mission objectives. It turns out the only things I still agree with are the production values, the atmosphere and the limited replay value. I guess you could say I disagreed with the price as well. Nevertheless, Siren: Blood Curse is a survival horror fan’s pièce de résistance. If you’re looking for a good scare and are willing to put up with a handful of discomforts, don’t let this one pass you by.