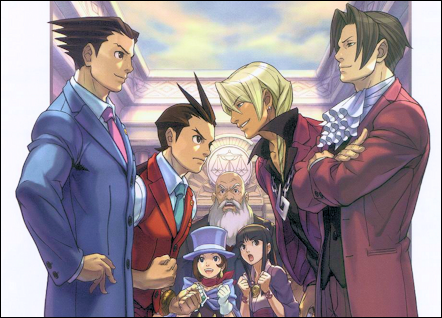 I’ve put off the unorthodox Ace Attorney series for quite some time now. I even recommended the courtroom drama series to my brother before playing it myself — he echoed the same high praise I’ve been hearing for the past several years. The series is difficult to describe only because whatever I say will make it sound incredibly boring. So I won’t bother. I won’t even bother with in-game screens or movies because that doesn’t capture the series’ strengths either. Only by reading the stories and meeting the characters for yourself can you truly appreciate it.

What amazes me most about the series is the amount of emotion invoked through the (original Game Boy Advance and) Nintendo DS without the use of substantial voice acting. Bleeps and bloops tied with the careful timing of words, music and simple character animations show that you can achieve a great deal with the most basic of elements. I tend not to build hostile relationships with video game characters, but I found myself despising numerous persons who passed through the courtrooms. It wasn’t all serious either. There were genuinely funny and light hearted folks to offset some of the intensity of poring through evidence and testimony. This delicate balance persisted throughout every game in the series and managed to deliver quite the rollercoaster ride for a court room drama.

Ace Attorney: Phoenix Wright set a great precedent. Starting the first case with the aid of Phoenix Wright’s mentor, Mia Fey, the spiky haired defense attorney and I were quickly brought up to speed on how trials worked. The Ace Attorney series based its court system off the one found in Japan (the one prior to May 2009). There is no jury; only the judge has the power to determine the verdict and it’s up to the prosecutor and defense attorney to plead their case. I thought this would get old quickly. What’s the point of continuously defending if I already know that I will eventually win a “Not Guilty” verdict? It turns out there’s a bit more creativity than I originally gave them credit for.

Miles Edgeworth, the irritatingly smug prosecutor transitioned from rival to defendant in an unexpected manner. His story along with the story of other characters were revealed through flashbacks and court testimony. I appreciated how the info was delivered in pieces and connected with threads left from prior cases. It was primarily used for overarching story progression and didn’t reveal many earth shattering revelations.

I found the the first installment intriguing and left me wanting more. It was filled with delightful surprises including an soundtrack which I didn’t come to fully appreciate until I played the sequel. I also loved the bonus case which teased what was in store for me in the Apollo Justice game.

Ace Attorney: Justice for All behaved just like any sequel would. It improved in some ways, but also altered things just for the sake of being different. Coming from the first game, I initially found a lot of the music and characters to be jarringly different. Two characters in particular, Franziska Von Karma and Pearl Fey, felt forced until their roles finally solidified in the final case.

The cases found in this installment were by far the wackiest. A majority of them felt trivial which made this game seem like a “mission pack” instead of a true sequel. Thankfully, the very last case turned it all around and ended up to being one of the most enjoyable cases in the series. It was the only case which kept me playing until the late hours of the night. This last case also answered the lingering question of how the developers would handle the idea of knowing the defendant was guilty.

Hint: It was well done.

The final installment of the “Phoenix Wright” saga, dubbed Trials and Tribulations, was both bountiful and delectable. They toned down the clowning around and brought back a more series tone. This installment also refocused on the mysterious past of Mia Fey and Phoenix Wright. I thought it was pretty clever of them to have players assume the role of a novice Mia Fey for the opening case. And before you condemn this “feature” as trivial, I found idea of playing as different characters refreshing. “How would Edgeworth fare as defense attorney?” Well it turns out that answer was in Trials and Tribulations as well.

When it came to the twists and suspense, this installment was a bit more in-line and less “out of the blue”. For better and worse, foreshadowing was a tad more evident which lead to me unraveling twists well before the game undid them. The same mindful thinking was put behind the “Psyche Lock” breaking and interrogation aspects (introduced in Justice for All) as well. Less frustration is always a good thing.

As for the highlight of Trials and Tribulations? It had to be the soundtrack which was easily the best in the series.

The most recent Ace Attorney entry to date, Apollo Justice, shows just how much weight the characters have with the players like me. After spending three games with Maya, Gumshoe and Phoenix Wright himself, I actually missed them in Apollo Justice. I’m not discounting the new cast though. In some ways, I found them to be an improvement over the original. (Trucy > Maya)

Being the first Ace Attorney game to be truly developed for the Nintendo DS, it came with all the niceties you expect from the platform. Thankfully, they didn’t go wild and repeat stylus gimmicks ad nauseam. But unlike Phoenix Wright, Apollo Justice has an innate ability to pick out people’s tendencies and can tell when they’re lying. It was an interesting touch screen mini-game for the first couple of testimonies. Then it became a bit of a chore.

I initially found the cases lacking because I was still holding onto the greatness that was in Trials and Tribulations. However, as soon as I moved on and focussed on Apollo’s tale, it was quite enjoyable. Not before long, the mystery of Phoenix Wright’s “downfall” surfaced to submerge me into the investigative mindset once again. And with how the final case tied the other cases and characters together, I was all smiles.

I was a skeptic at first, but I look forward to learning more about Apollo Justice in the future.

Today, I am very much a fan of the Ace Attorney series. I hold it highly in the pantheon of great game series. And it isn’t even a “game”. There are certainly game elements such as a “life” bars and game over screens to keep the player on their toes. And yet I believe they could do away with these “game” trappings and focus on the story itself. I’m already “cheating” the system with the “save and quit” strategy during the more confusing moments. Each game had at least one or two moments where it wasn’t obvious as to what evidence I should be presenting to progress with the testimony. More often than not I knew the answer, but I just didn’t know which item to throw out there.

It’s a shame this series isn’t on more platforms. It could work on any platform; you don’t need the stylus as evidenced by the series humble origins. I was looking for a fresh and different experience and the Ace Attorney series didn’t disappoint. Who knew being a defense attorney could be so fun? Thanks Capcom.