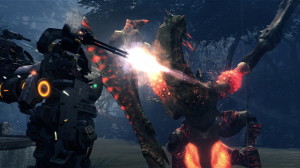 The Lost Planet demos were amongst the first ever Xbox 360 demos I’ve ever tried; they served as my first single player and multiplayer experience for this generation. Since snow settings are by far my favorite, Lost Planet felt like an ideal game made for me. Then the reviews hit and convinced me to hold off for more attractive pricing.

I have yet to pick it up.

Now we have Lost Planet 2. Screenshots and video reveal a gorgeous looking game while previews say it’s a blast to play. Well, I’ve tried both demos and came away with rather mixed feelings.

I tried the 360 build first which started immediately with that boss fight everyone (including myself) was amazed by. I knew the experience wasn’t going to be ideal by myself, but I was curious how well the game held up to solo play. To my surprise, it held up quite well. My A.I. partners died immediately and yet I was still able to take down the giant beast.

At this point I was feeling pretty good about Lost Planet 2. Huge bosses with multiple points of attack with multi-man mech suits and rocket launchers? How could Lost Planet 2 not be good — especially with live players. Well for starters, the filler in-between the bosses.

Given the amount of time between the release of the Xbox 360 and PwlayStation 3 demos, Capcom included two new areas for their PSN demo. I can’t say these were particularly exciting. The word “boring” seems more apt here. Mowing down wave after wave of insects emerging from never ending spawning pods isn’t as exciting as it sounds. And that remains even after inviting a buddy along for the ride.

As expected, the inherent nature of co-operative play with live players made tackling of the boss more entertaining. We made quick work of it and found ourselves wanting more of the boss fights. It demanded actual teamwork out of us and some level of coordination — unlike the filler sections.

Visually, Lost Planet 2 was okay. Once again, the shining moment was the boss encounter. Any other section seemed very poor with noisy rain effect. The vegetation wasn’t so hot either. I don’t want to harp on it too much because these are demos, but we all know what Capcom’s MT Framework engine is capable of and are hoping that they pull it together in the final build.

The PlayStation 3 demo exposed Lost Planet 2‘s weak underbelly and it’s quite the doozy. If the retail product is more of these “filler” areas than bosses, I doubt the chances of me picking it up. But even if it was more of a boss oriented game, I will have to convince someone to hop onboard with me.