I never intended to pick up Halo 3: ODST primarily because I was “Halo’ed” out after Halo 3‘s campaign I didn’t want to see or hear the Master Chief again. I wanted no more Cortana and no more of the Flood either. I guess Bungie felt the same way by the looks of ODST. With this installment, Bungie took the successful Halo 3 formula and remixed it for another adventure. This prequel to 2007’s multi-million seller may feature a shorter campaign and questionable pricing, but I liked it. You could say that I liked it more than Halo 3 itself.

Everything about Halo 3 felt epic; from its marketing campaign to the game itself. It was the Master Chief’s farewell party after all. By contrast, ODST was subdued, more subtle and less “in your face” than its kin. The opening scene of a massive orbital drop gone awry was just about as “epic” as you were going to get with ODST. After that, it’s all about piecing together what the hell happened to the Rookie’s team. He’s the silent type so you won’t hear him talking to himself or talking altogether.

Emerging from the drop pod into the dimly lit urban center of New Mombasa felt refreshing. Quiet tunes from a piano fills the air of mystery and intrigue; it was time to explore. Bungie used this night time investigation as a hub world to lead into other scenarios involving the Rookie’s squad mates. Each “level” was triggered by locating a soldier’s helmet or even a piece of scrap metal. It was an interesting way of laying out the levels without the need for played out transitions from one battle to the next.

I could have explored the abandoned city a bit more, but with a co-op partner and a map beacon I found it hard to resist the call for progression. If we did take the time to explore we would have been rewarded with more side story audio logs. And possibly more unwanted enemy encounters; both of which we could have lived without. I appreciated the option to sneak around enemies and just relax to the night life of the abandoned New Mombasa; it was quiet and serene where the excellent soundtrack could really shine. 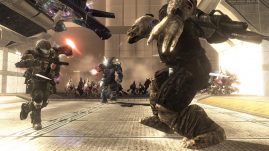 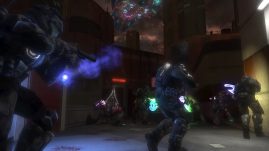 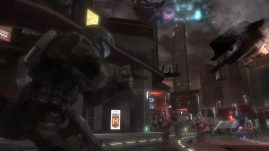 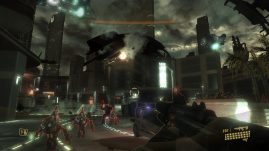 There was only one annoying distinguishable difference between an Orbital Drop Shock Trooper and the Master Chief. I didn’t mind replenishing health with med packs or not being able to dual wield weapons. And given the opportunity in Halo 3, I would have gladly traded in the ability to use equipment for the slick visor of an ODST in a heartbeat. However, give me back the peace and quiet of the Chief’s helmet. Who thought it was a great idea to have that annoying alarm go off every single time health dropped below 75%? Were they afraid people were too stupid and not realize they were in mortal danger? I mean, wasn’t that red health bar in the middle of the screen enough? Just imagine having to hear two low health ODST armors go berserk during a local co-op session. It’s a nightmare.

However, bless Bungie for the concise campaign. It was nice to see the Scorpion tank and the Scarab again and I’m thankful to Bungie for not overdoing it with these set pieces. Whilst Halo 3‘s campaign featured close, medium and long range combat, ODST kept it more personal and fast paced. The urban setting allowed for more cover weaving and forays with the Brutes. I’m not sure if the A.I. was improved or not, but these Brutes seem a lot craftier this time around.

Trying to summarize my feelings for Halo 3: ODST was a bit tough. This was initially billed as an “expansion” to Halo 3 and after having played it, it still feels like it. My reaction to it is similar my reaction to Half-Life 2: Episode One. It provided more of what was great without the tedium of the original epic. My admiration for the episode only exists because of the existence original and that’s how I feel about ODST. It hits on a lot of the great moments of Halo 3 with a refreshing twist. Whether or not this wonderful campaign and the newly added “Horde”-esque mode, Firefight, is worth the current price of admission is up for debate. Just make sure to get around to playing that campaign some day.

P.S – Next time, have all the characters keep their helmets on. At all times.

For more information on Halo 3: ODST, visit the official website.