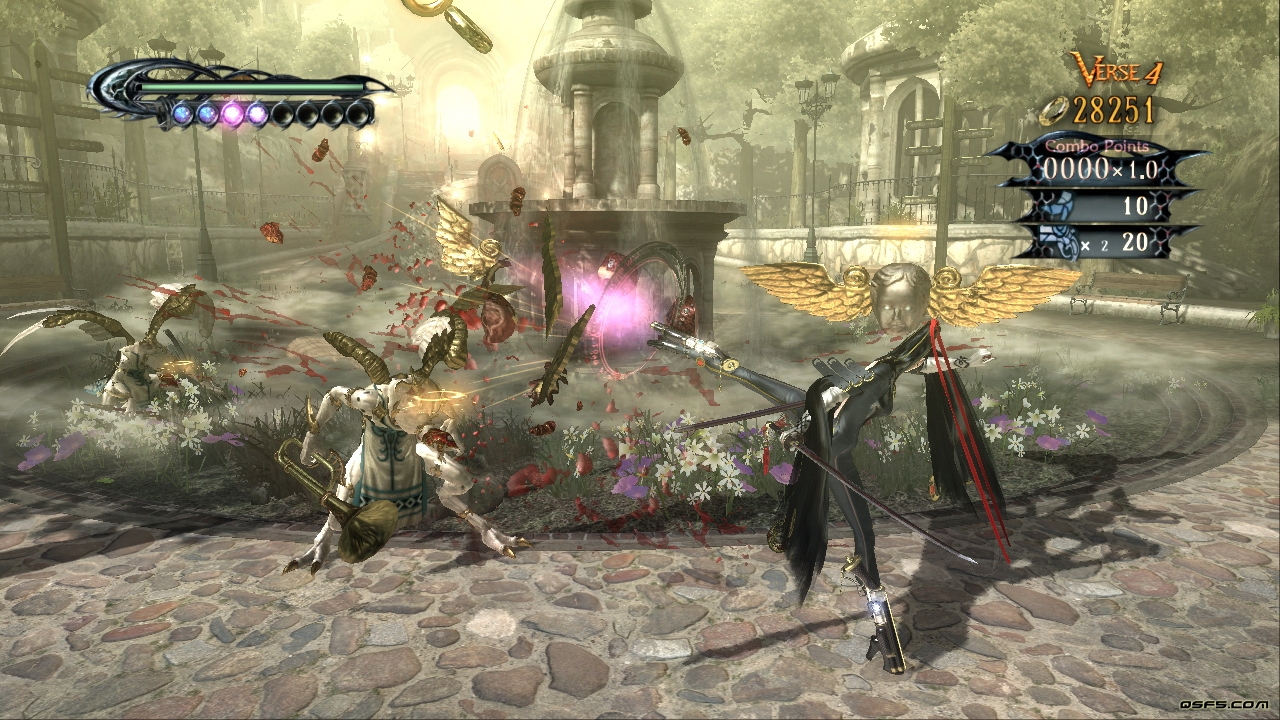 When the creator of Devil May Cry announced a new action game, I took note. No matter how ridiculous, cheesy or down right awful Bayonetta looked in video, I had to try the demo for myself. I chose the Xbox 360 demo after hearing unfavorable things concerning the PlayStation 3 build. If there’s any genre which requires steady framerate, it’s the action genre. Shame on Sega & Platinum games for letting their PlayStation 3 version falter.

A story cutscene greeted me upon starting and I watched it out of respect. I didn’t care for it. Angels, witches and that whole bit didn’t interest me whatsoever. I just wanted to see Bayonetta show off her swagger and sexiness not her mysterious past — play to your strengths, Platinum Games! I also wanted to see how the in-game engine fared, but was disappointed by nearly everything that wasn’t Bayonetta herself. It’s obvious what (or who) the artists focused on.

As a result, Bayonetta herself looks fantastic. Her actions are swift, smooth and seductive. Despite being a demo, the list of moves available provided a plentiful mix up of hand-to-hand, sword and gun combat — and yes, being able to switch between the combo sets on the fly is in. Bayonetta’s fancier combos ended with grand smashes and were a blast to pull off in the middle of all that chaos. Her hair formed deadly oversized boots and fists to finish off these “angels”. It was ridiculous and yet fitting at the same time.

While the backdrop and enemy designs may seem drab, the choice of music and dynamic stages kept spicing things up. Instead of hard rock or faux rock, it was pop music. Well, not exactly pop, but I don’t know how to describe it; it’s different and that’s all that matters. Within this short demo and I’ve already played two areas where the stage itself was constantly moving. The first stage had Bayonetta moving from one giant slab of falling rock to another while the other took place on a bridge which was manhandled by a giant beast of some sort. Very cool to play so I hope to see more of this.

I was also pleased by the game’s performance. The action got hot and heavy, but the engine kept things together. As it should considering this game isn’t that much of a looker in the first place. As mentioned earlier, aside from Bayonetta herself, the game looked bland. This is especially disappointing considering the fact that PlayStation 3 build struggles to keep things together while looking worse. That’s some poor porting right there.

The demo left me wanting more of Bayonetta. I want to see more of her crazy combos and special moves. I don’t mind the silly story or even the less than stellar visuals; it’s that solid action foundation which tickles me. But to drop $69.99 just to see more of Bayonetta kicking ass? That’s a tough sell. There are more complete packages out there. She’s good, but not $69.99 good. At least not from what I saw anyway. Who knows? Perhaps the rest of the game will ramp up even further.

I’ll just have to wait and see.

For more information on Bayonetta, visit the official website and releases January 2010 for the PlayStation 3 and Xbox 360.