Simulation racers were not my cup of tea for quite some time. I’ve tried playing Gran Turismo 4 and Forza Motorsport 2, but dismissed them shortly afterwards. I’ve also tried the Project Gotham Racing series which skewed more towards the arcade style racer. I’m more of a Need For Speed fan, I guess. Need for Speed: Most Wanted was the last racer I finished which featured licensed cars. And why is that? Why can I race in Phantom speed class in a Wipeout HD, but can’t find the heart to tackle the Nurburgring in a McLaren SLR in Gran Turismo? The answer is simple; I hate wasting time.

Unlike other sim racers, I was making significant progress with Forza Motorsport 3 in every play session. Whether it was increasing my driver level or acquiring more credits to buy new cars, I was moving forward and let me tell you: it was a gratifying feeling. And given the strong fundamentals found within Turn 10’s third outing, it’s not surprising.

Turn 10’s responsive driving model returns accompanied by enough difficulty options to cater to racers of all skill levels. Auto braking, racing lines and anti-lock braking options were nice, but it was the rewind feature which helped me sink my teeth into how each of the vehicles reacted. I no longer had to restart an entire race just because I overestimated the braking capacity of Audi R8. This near limitless undo function erased costly mistakes and enabled me to experiment with the cars without fear. And as I grew accustomed to how the cars handled, the use of rewinds became few and far between.

There’s no immediate penalty for using the rewind. If I was really dedicated, I could post some ridiculously low times on the leaderboards with its help. However, there will be a tiny symbol beside my record signifying an impure lap. Corner cutting, paint scrapes and even the use of drafting will compromise a lap and raise this tiny flag. It’s this kind of take it or leave it attitude which I love about Forza 3.

Unlike other racers, drifting and lonesome time trials are optional. These two ‘event types’ were regulated to meta game status. If I wanted to post hot lap times or embarrassing drift scores, it’s already done automatically for every track. These are hidden away and left as clear options for those who want to exercise these skill sets. 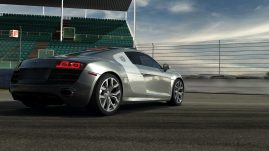 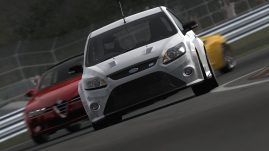 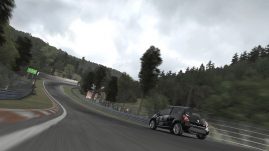 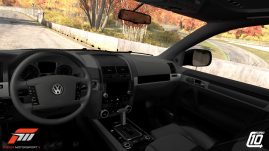 The vanity differences between Forza 3 and its predecessor was hard to ignore. The front end was overhauled to a clean and sleek design. The fact that I could transition from menu to menu with ease may seem minute, but it’s something the predecessor fell short with. Events are now presented through dozens upon dozens of unique posters and described vocally by a British. And, as we all know, everything is classier voiced by the British.

Similar upgrades were found in the game itself. The lighting model was more realistic and subtle this time around resulting in cars which actually look like they fit on the race track. The cars not only look substantially better this time around, they also feature in cockpit views for each and everyone of the 400+ cars. I expected highly detailed interiors with hands shifting gears and was a bit disappointed by what was offered. It’s a commendable effort and the it’s a real pleasure to drive with the cockpit view, but it isn’t anywhere near the stuff Shift or Gran Turismo 5 is sporting.

Turn 10 focused a lot of their attention on the car modeling — the results speak for themselves. The race tracks, on the other hand, can be down right ugly at times with low resolution textures, distracting aliasing along power lines and other edges. Some tracks were gorgeous while others, such as the expansive ones, weren’t showcasing Forza 3‘s good side at all. It’s very fortunate that this game holds a solid 60 frames per second, because I can forgive these visual anomalies for the sake of pristine framerates.

Since I am not a member of Microsoft’s ‘pay to play online’ club, a significant chunk of Forza 3 will go unused by yours truly. No auction house, no storefront, not even the gifting of cars. I am not much of an online racing fanatic, so the inability to race life opponents doesn’t bother me, but not being able to interact with the Forza marketplace is a bit of a bummer. I don’t have the patience nor skills to pretty up my cars, but I do wish I could spend some virtual credits for some of the amazing works out there.

Forza Motorsport 3 is my favorite simulation racer thus far. I can say that with confidence. It’s a dream to play and that’s what’s most important to me. It doesn’t matter how pretty your cars are, if I can’t enjoy the game: what’s the point? And that’s what these developers have enabled; a way to ease into the enjoyable world of simulation driving. Thanks for teaching me how to drive virtually, Turn 10.

P.S – Not having my favorite car, the Nissan GT-R, is a damn shame.

For more information on Forza Motorsport 3, visit the official website.