I picked up our first Xbox 360 back in December of 2006 or so. We actually went through three of them before finding one that didn’t succumb to the infamous “Red Ring of Death”. When we finally settled with an Xbox 360, it was mostly smooth sailing. Disc read errors would occasionally crop up with the more streaming intensive games, but since arrival of the NXE and its game installation capabilities: it’s been good.

So why did I buy a $200 Xbox 360 Pro last week? Three reasons: the HDMI port, the Jasper motherboard and the additional 40 GB of hard drive space. We don’t need an additional Xbox 360 for co-op games here since we don’t believe in paying for the ability to play online.

Outputting via HDMI produced a noticeably crisper picture, but it also introduced its share of problems. Anti-aliasing was more noticeable which meant I need recalibrate my already sketchy HDTV (check out the latest update on that if you’re curious).

I expected the changes in this new Xbox 360 to be internal, so I was pleasantly surprised to discover this: 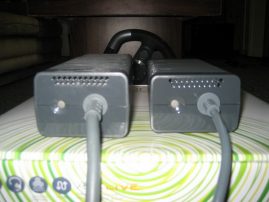 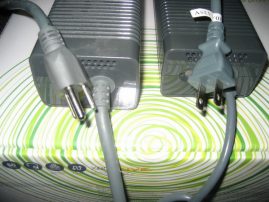 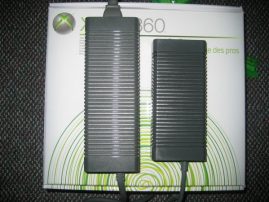 The 2006 Xbox 360’s power brick is enormous and uses a three prong power plug. While the Jasper unit sports a respectably sized brick and a more traditional two prong power connector, I still wish it wasn’t so large. I still find the Xbox 360 too cumbersome to lug around with its meaty power and AV cables.

As for the additional hard drive space? I won’t be able to reap the full benefits until I get my transfer kit which should be any day now.

In the end, I’m pleased with the Jasper. The fear of RROD can finally be put to rest and I can focus on enjoying what the Xbox 360 has to offer. Money well spent.