It has been nearly 20 years since Super Mario World was released for Japanese home consoles. That was the last time we saw a traditional 2-D side scrolling Mario game on a home console — a long damn wait for some sort of sequel. Super Mario World was my first and favorite 2-D Mario game. I’ve played all the rest since then, but I will always hold that game as the pinnacle of 2-D Mario games. And even with the release of New Super Mario Bros. Wii, I will continue to hold it with high regard from at least a single player perspective.

I can appreciate the idea behind New Super Mario Bros.; going back to the basics and what made the original Super Mario Bros. games resonate with millions of people. No more key carrying, vertical item kicking and certainly no more multicolored Yoshis with special powers either. It makes for a streamlined game, but unfortunately a less dynamic game. The single player experience is just as straight forward as the Nintendo DS installment and the lack of challenge will leave most veteran players a bit disappointed.

For me, the success and genius of the game came through via the co-operative play. Up to four players can stumble their way through this game. I paired up with my brother and it became immediately apparent how hectic and perilous the simplist of platforming can become with each of us occupying a piece of physical space. Unintentional jumps off each other’s heads became regular occurrences and tested the strength of our bond as brothers. Once we’re on the same wavelength, however, we were able to lift ourselves onto harder to reach platforms and save each other from untimely death through the use of synchronized butt stomps. 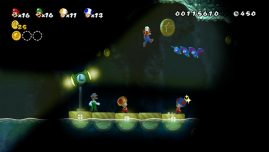 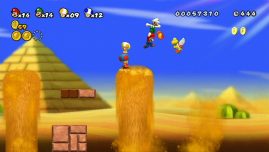 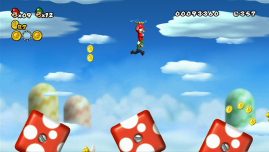 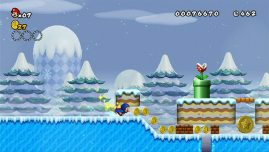 Although it may be tricky having multiple characters on the screen, Nintendo did provide the instant “bubble” escape as a means of refuge; sometimes its best to only have one person risking his/her life. It’s a neat way to save lives and help the less experienced players get through difficult sections, but I would have liked a “no fail” mode or, at the very least, life sharing capabilities. These, along with the inability to properly save at any time prior to finishing the game, were surprising omissions coming from Nintendo.

New Super Mario Bros. Wii would have been a ho-hum game if it wasn’t for the co-op. Bringing back the Koopa Kids and including a couple of new power suits isn’t quite enough to woo me anymore. What it took to impress me was the cleverly designed co-operative play. For the first time, we’re able to use each other as platforms and rescue the Princess as team. Hilarity, frustration and genuine fun can appear out of nowhere and that’s something that isn’t easily crafted. The single player experience may may not be the proper sequel to Super Mario World that I hoped for, but that co-op element is worth the price of admission alone.