Every developer has a franchise or game which they are known for. Infinity Ward has the Call of Duty franchise. Ubisoft has Prince of Persia, Splinter Cell and Assassin’s Creed franchises. I associate Insomniac Games with the Ratchet & Clank series. It’s what they’re good at and Ratchet & Clank Future: A Crack in Time is a testament to that. They’ve improved on nearly every aspect of its predecessors which can be tough when considering the fact that this is the sixth featured length game they’ve created with the Lombax and his robot companion.

I’m guilty of calling the predecessor’s visuals “Pixar quality”. While A Crack in Time is an improvement over Tools of Destruction, it didn’t illicit the same reaction from me this time around. Don’t be mistaken, it’s still a technical achievement. The entirety of the game may not be the uncompromising 60 frames per second Insomniac Games hoped for, but it still held up marvelously during the most chaotic of battles. Solid framerate is key and as much as I enjoy the 60 FPS in A Crack in Time, I can understand their desire to not pursue it in the future.

Enough about game tech, let’s talk weapon tech — Ratchet and Clank’s tech. Ratchet always had the fun toys and this time around is no different. As expected there were new variations on existing archetypes and the return of old favorites like the Groovitron and the lovable Mr. Zurkon. Unexpected was the ability to find and customize certain weapons; primarily the less quirky concoctions like the grenades and blasters. I was able to tweak fire rates, alter shot styles and add additional flavors to these otherwise standard firearms. 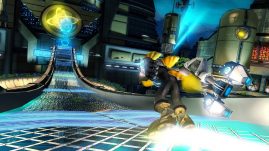 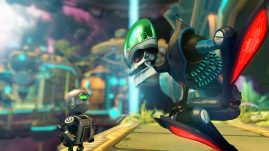 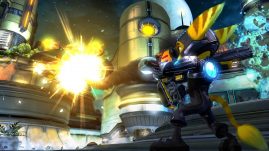 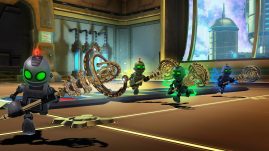 The layout of A Crack in Time was more varied and open compared to what Tools of Destruction offered. As soon as I got back into my starship, I was able to take on whatever I wanted. The large story driven planets were still there, but now they share space with the smaller bite sized planetoids/moons as well. These usually take no more than 10 minutes to complete and offer a more raw platforming or combat oriented experience. Platforms will float in the air for the sake of gameplay and nothing else. I loved these little things. I wish the entire game was comprised of nothing, but these mini-levels.

The Clank segments were once again completely segregated from Ratchet’s adventure. This time, however, Clank was toying around with time related puzzles. I enjoyed them, but I wish they were better integrated with the rest of the game. It was if I was playing Half-Life 2 and then I was suddenly interrupted by several Portal levels. It was a bit jarring and there were times when I didn’t want to break away from Ratchet’s adventure.

This full fledged sequel unraveled and explained the mysteries laid out by Tools of Destruction. It more or less accomplishes the goal, however it was predictable from beginning to end. The only things I couldn’t keep track of were Dr. Nefarious and Captain Quark’s antics. The evil robot and the bumbling “superhero” were the comedians in this show. It’s a shame they separated Clank and Ratchet for so long because I really did miss the conversations the duo had in the first one. And whatever happened to Talwyn Apogee and the robots? They were noticeably absent with no real explanation as to why.

To best sum up Ratchet & Clank Future: A Crack in Time as a whole, I look at the controls. It’s not drastically different from its predecessors, but there were changes made which enabled Ratchet to move more fluidly and openly. Throwing Ratchet’s trademark wrench was no longer awkward and can be done while in midair. And like I said, that’s how I feel about this game as whole. I felt less restrained and was able to approach nearly everything the way I wanted. These qualities along with everything else Ratchet & Clank series is known for is why I found A Crack in Time the best game Insomniac Games created thus far.

For more information on Ratchet & Clank Future: A Crack in Time, visit the official website.