The last of 2007’s fourth quarter blockbusters has landed. Like Assassin’s Creed, BioWare’s Mass Effect was a flawed game filled with promise and intrigue. Mass Effect 2 is a realization of the many ideas put forth in the original, but it is also a sequel which made some of the most dramatic changes from one installment to another. Many of the changes moved the franchise forward. Some were more lateral while a small handful felt like complete degradations. The end result, however, was the most satisfying science fiction experience I’ve ever had.

Technical issues hampered the original a great deal. Texture pop-in, long load times, image tearing, inconsistent and sluggish framerate; these issues were all, but extinct in Mass Effect 2. The framerate wasn’t as smooth as I would have liked in all spaces, but it was, most importantly, unwavering during combat. It feels great to finally have the game run as good as it looks.

The first Mass Effect was about introducing the universe and the fiction. There was a great sense of exploration and scale which was reflected in both the narrative and the game’s mechanics. Mass Effect 2 narrowed its focus to humanity’s new role in universe and Shepard herself (female Shepard is the true Shepard as far as I’m concerned). There was less mingling with tertiary races such as the Hanar or the Volus. Instead, the spotlight was placed over the eleven recruitable characters and their respective stories. Even the sidequests remained pertinent to the needs of humanity.

Many tiny treasure troves were uncovered with the original game’s Mako vehicle and I would have gladly taken those lifeless worlds over the excruciating exercise of  mineral gathering found in Mass Effect 2. Playing “hot and cold” and launching probes into planets was amusing for the first couple of planets, but it becomes a chore when I realized the importance of minerals. Although, it is still a choice whether or not I should upgrade my gear and ship, it is highly recommended if I was going have any chance in surviving the final mission with my crew intact. This is the one aspect of Mass Effect 2 where I felt BioWare made worse with the sequel.

On a 1 to 10 scale, where 1 represents ‘RPG’ and 10 represents ‘shooter’, the original Mass Effect would sit squarely on the 5 mark. Dice rolls and traditional role playing statistics played a role in how weapons behaved. Mass Effect 2 is more of an 8. If I’m aiming at an enemy’s head, I can can pretty much guarantee that my bullets will land there. I can still, however, apply elemental properties and manipulate damage properties through whatever role playing stats are left. While the cover system underwent a similar overhaul, it occasionally succumbed to glitches. It was a good effort though. 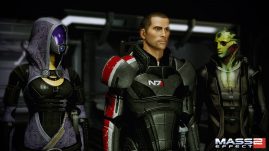 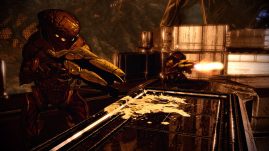 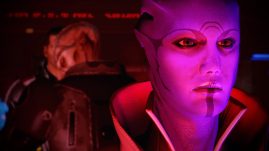 Improvements to the action element came with a hefty price though; much of the role playing elements from the first game were jettisoned. No more inventory management. No more loot drops. Not even experience points for defeating enemies. Experience points were doled out at “Mission Summary” screens after each quest completion. The same goes with the credits. I was still able to procure and find weapon and armor upgrade schematics, but it wasn’t the same as finding a weapon cache in some remote mercenary base. But if I had to give up those RPG elements to get a more refined shooter? I’ll gladly make the trade.

Fortunately for me, the franchise isn’t about the stats, inventory manipulation or having convincing A.I. enemies since Mass Effect 2‘s A.I — on all fronts — is prehistoric to say the least. The Mass Effect franchise, to me, is about the sci-fi experience and the characters. Having conversations with wondrously voiced characters and soaking up all that fiction and atmosphere; that’s what I love about the Mass Effect games. And this installment in the trilogy delivered what I love in spades.

Family turmoils, racial tensions and morale dilemmas were prevalent themes here. I pondered over many of the tough decisions and made the effort to gather as much information as possible before I made the decision. How can anyone justify patricide and filicide? Where do we stand on the subject of artificial sentient beings? Do they have rights? There were many tough decisions to be made and I know that these choices have ramifications. They may not unfold in this installment, but I know BioWare will make something out of the choices I made in Mass Effect 3.

I was unable to import my character for Mass Effect and I regret it. I thought I could ignore that fact and play with BioWare’s default choices, but I felt disconnected. This was no longer entirely my adventure. In my story, Wrex lives and Anderson is at the head of space U.N. — it’s amazing how much of a personal touch is achieved with these choices.

Some argue Mass Effect 2 isn’t a role playing game anymore. “There’s not enough customization.” they say. But when I think back on Mass Effect, I don’t remember the kinds of equipment I picked up or the different skills I invested talent points into. I recall the grand adventure I had, the decisions I made and the characters I met. Mass Effect 2 gave more opportunities to meet new truly interesting characters, discover dark and twisted scenarios and create new memories for me to bring into Mass Effect 3. And it does all this without the technical hiccups of old. Aside from the one solitary blemish with the planet scanning, Mass Effect 2 was a remarkable game and one which I certainly did not want to end.

For more information on Mass Effect 2, visit the official website.