The parts for my PC arrived today.

I haven’t built a PC from scratch since my 2006 PC. Four years seems like a long time in the PC world, but assembling a PC is remained fundamentally unchanged. However, be that as it may, I did learn a few things which I’d like to point out and share some other thoughts during the assembly of this 2010 PC.

The Antec Mini P180 case and the Cooler Master Hyper 212 Plus both had terrible documentation. I spent a lot of time installing the motherboard and CPU cooler thanks to the sketchy documentation. The basic info was there, but it wasn’t particularly clear. 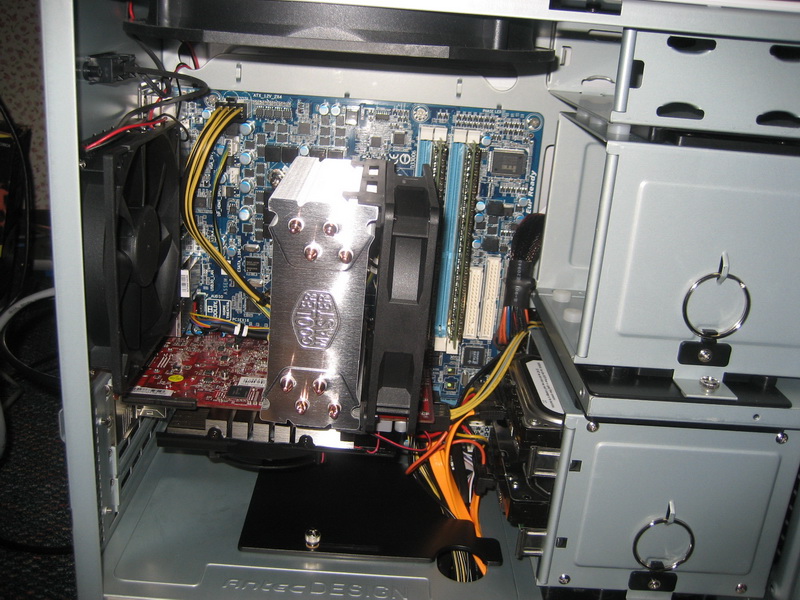 The Antec Mini P180 is the most versatile case I’ve ever used with regards to cable management and just organization in general. They’ve thought of nearly everything for this case. Many places to tie down cables and tuck them away from view and disrupt air flow.

Unfortunately, the Antec EarthWatts PSU I purchased did not have the appropriate 8 pin PCI Express power cable length which means it’s one of two cables actually running across the  motherboard. I’ll need to buy an extension cable for the 8 pin PCI-E power cable and the CPU fan power cable if I want to run it via the back.

I’ve also moved from twist ties to zip ties for this build. Zip ties are awesome!

We don’t need floppy drives anymore, but what about optical drives? Ever since I used my Dell Mini 9, I don’t even see the need for one. If I need to use an optical drive, I’ll just use the one in one of my other computers.

I’ve always wanted a cool and quiet running computer and I think I’ve finally achieved with this build. I’m only installing Windows 7 at the moment, but I can’t hear the damn thing at all. Large fans running at low speeds does wonders.

I discovered that not all motherboard manufacturers have the same RAM installation methods. I’m used to installing two sticks of dual channel RAM on the A slots of an AB-AB layout. Gigabyte wanted me to install them on the B slots. Which lead to some head scratching.

The Antec case didn’t come with a speaker for POST beeps and the motherboard’s “Phase LEDs” were just for show. Thus, I was essentially blind to what the PC was complaining about when I initially booted up with the wrong RAM configuration.

I noticed that my CPU fan wasn’t spinning, so I plugged it into the case fan power connector and it spun up.

“Was it a bad connector?”

Restarted the computer and it still didn’t POST. Eventually, I retraced my steps and documentation and noticed that I had the wrong RAM configuration. After fixing that little problem, the PC finally showed the gaudy Gigabyte boot screen image. It also turned out that the CPU fan power connector was faulty. The fan simply doesn’t start spinning if the RAM wasn’t configured properly. I’m guessing the CPU wasn’t even fed power in that case.

MicroATX Is Small, But Not Impossible

You need a lot of patience to work with MicroATX. I have experience with Shuttle PCs so I knew what I was getting into, but I know that not everyone has the patience to play with this form factor. There isn’t much room which means a specific order in which to install things. If you mess up, you’ll have to take everything out again or hope you have very slender fingers.