The Windows Experience Index score is a constant reminder of the bottleneck that is the hard drive. Installing any solid state drive will make a significant difference to nearly any computer is. But, as you know, I’m not one who will settle on anything.

I want to find a relatively high performance solid state drive with at least 36 GB of storage space for under $150 CAD after taxes and shipping fees. Why 36GB? It will replace my current OS drive, the Western Digital Raptor 36 GB.

I purchased a Western Digital Raptor 36 GB w/ 8 MB cache model back in around 2004. The WD360GD was the first 10, 000 RPM consumer level hard drive and it served me well for many years. Therefore, I’m used to working with relatively small storage space. And since I’m okay with low capacities, the number of SSD drives available to me is quite numerous.

Those are just a few of the options available. After weighing the options, I’ve settled between two choices: the Kingston SSDNow V Series Gen II or the OCZ Vertex 2.

The OCZ Vertex 2 is noticeably faster than the Kingston on paper.

The dollar/gigabyte ratio favors the Kingston, but performance is important to me which is why I am leaning towards the OCZ option.

As I was sifting through reviews and benchmarks, I decided to download HD Tune Pro 4.50 to test my own hard drives. Here are the results.

The WD360GD was surprisingly (to me) awful when it came to transfer rate. It’s still snappier than the new Caviar Black thanks to the quicker access times, but it’s slow as molasses compared to the <0.5 ms access times of a solid state drive. Like the one in my Dell Mini 9.

But what will I do with my WD360GD drive? It works perfectly fine. Or so I thought.

I decided to check the Health Tab and discovered the following: 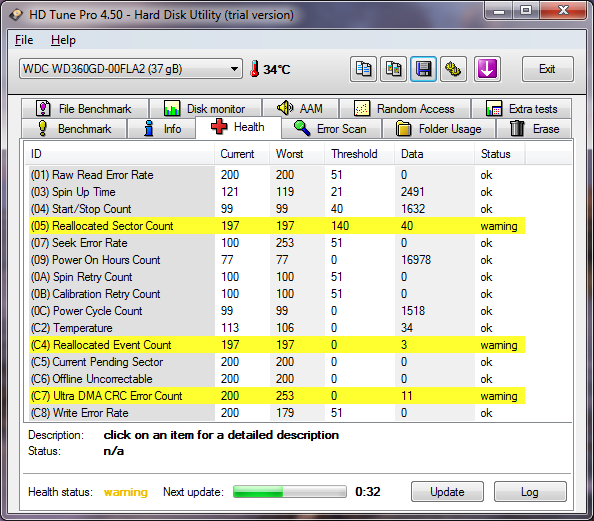 Warnings? Reallocated sectors? What is all of this? Is my drive dying? The answer wasn’t so simple.

Checking up on these warnings yielded many forum posts of people recommending that it was time to replace the drive. “Reallocated Sector Count” essentially means that I did have bad sectors, but the hard drive successfully reallocated a spare. My count was 40 which means that I had 40 bad sectors. There is a performance hit thanks to this reallocation, but my drive should be okay.

I decided to get a second opinion with Western Digital’s Data Lifeguard utility and the SpeedFan utility. The former stated everything was “OK” while the latter stated that I should keep an eye on the drive to see if the “Reallocated Sector Count”  continues to climb.

So now what? Should I toss this WD360GD out? It’s still a good drive with a few bumps and bruises. I can still use it, but it is noticeably slower than today’s offerings. What I should do is put it in RAID 0 with my brother’s WD360GD (which we discovered had 2 reallocated sectors).

I’ll be curious to see how 2 x WD360GD’s stack up to the new SSD. It won’t be nearly as fast, but it should be noticeably faster than any 7, 200 RPM hard drive, right? We shall see.

Looks like I should reevaluate my RAID 0 idea. This 2004 AnandTech article shows very little performance increase, if any. That’s going to put a bit of damper on things.