Out of all the Nintendo franchises, only two have earned the benefit of the doubt from me: the mainline Mario and Metroid games.

Super Metroid sits very high on my “Greatest Games of All Time™” list and since then, I’ve purchased every title on the home console. I wasn’t going to allow mixed reactions prevent me from picking up this Nintendo-Tecmo collaboration. What can go wrong? It’s Nintendo and the developer of Ninja Gaiden franchise working on a non-first person Metroid game. It was the return of side-scrolling Samus and I wasn’t going to miss it.

Other M opened with the final scene of Super Metroid and quickly went south as soon as the narration began. They gave Samus a monotonous voice, a cheesy backstory and effectively ruined the mystery of the girl in the power suit.

Why did they find it necessary to explain Samus? She was a much more interesting as the person whom we only saw in the glare of visors or during the final scene of a game’s ending. They nixed one of the staple themes of the Metroid series and for what? A more “bad ass” blonde chick? We don’t need more of those.

But the real atrocity was what they did to the game itself. Metroid games were about exploration and deciphering the environment. In Metroid: Other M, I was told exactly where I needed to go and exactly what I needed to do via waypoints and dialog boxes. Adding insult to injury was the lack of challenge; it was more or less a straight line towards the next waypoint.

I didn’t need to shoot at enemies unless it was a requirement to unlock the next section because they gave me nothing. Enemies no longer dropped missiles or energy orbs because I was able to regenerate missiles at will. Samus was also able to regenerate at least one cell’s worth of life energy once she was near death.

So what was the point of fighting?

The two new abilities given to Samus made life for her even simpler. I abused the dodge to no end since I all I had to do was spam a direction on the control pad and she would get out of harm’s way nine out of ten times. And as for the ability to enter first person mode a la Metroid: Prime? All that did was strip away the mystery to defeating any boss because I knew every boss would employ this gimmick in some form or another.

I’ve heard some complaints against this game’s control scheme, but I found them to be fine. It was a bit cumbersome at first, but within the first hour or so, I was able to flip in and out of first person mode without any trouble. This may seem a bit awkward, but the only time I felt the controls were restrictive were during the clue hunting moments where they’d lock Samus down and I had to look around for something to scan. I never got used to those.

It shouldn’t be much of a surprise then to realize that I began to really enjoy Metroid: Other M after I defeated the final boss and watched the credits roll. Because then, I was left alone to search for the missing power-ups at peace — no narration, no silly boss battles and only one final waypoint to deal with. I don’t know if I’ll continue for the 100% completion, but then again this “epilogue” was the closest to the Metroid game I was seeking for when I inserted the disc.

Well, this may seem trite, but I can honestly say this is the defining image of Metroid: Other M. For now and forever. 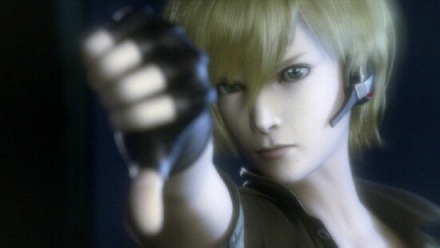 For more information on Metroid: Other M, visit the official site.