I don’t know what kind of campaign to expect from a Call of Duty title anymore. I know what I’ll be doing (shooting dudes), but I don’t know what the context will be. Call of Duty used to mean a close to reality retelling of World War II battles. With Call of Duty 4: Modern Warfare, it meant a fictional military operation set in the modern day. And then there was Modern Warfare 2 which ushered in the nonsensical over-the-top scenarios that were more ridiculous and more grandiose than anything before it.

All I knew going into Black Ops was that it was situated in the Cold War era and some of it was going to take place during the Vietnam War — and that was it. I certainly didn’t know it was going to turn out to be my favorite Call of Duty campaign.

Context was the key differentiator between Black Ops and Modern Warfare 2. Treyarch used the Cold War era and its themes to create a narrative that was both interesting and uncommon in games. I’m genuinely surprised there aren’t more prominent Cold War era first person shooters like this.

This Call of Duty didn’t feature a silent lead character. Alex Mason had a voice; Sam Worthington’s awkward pseudo American accent which he couldn’t maintain to save his life. But it wasn’t the lead character I was drawn to, it was what was happening around him.

The title screen showcased how dedicated Treyarch was to the Cold War aesthetic. I was in an interrogation room seeing through the eyes of Alex. I was strapped in a chair and it was obvious that unpleasant methods of persuasion have been used. The monochrome monitor in front of me served as the game’s main menu. Up above, I saw the silhouette of a man in a window overlooking the room. And, every so often, that mystery man shot a question at Alex through a voice altering mic.

What an awesome set up.

I was digging this crazy tale of brainwashing, biological doomsday weapons and covert operations. It may have been farfetched and impossible when if I pondered it over carefully, but it wasn’t as crazy and dumb as Modern Warfare 2’s. This Black Ops, however, was Return to Castle Wolfenstein evil Nazi scientist kind of craziness — the kind I enjoy. 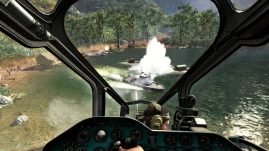 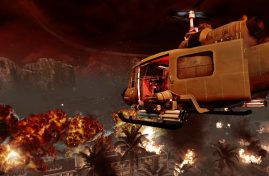 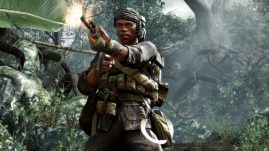 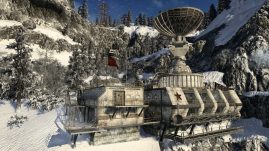 Treyarch tinkered with historic events, dug into conspiracies and hypotheticals. Sometimes it worked while other instances seemed forced. (Reach the ending and you will know what I’m talking about.) But even though the game seemed like it was taking itself seriously, I (want to) believe they were taking it all in stride. That Horatio Caine reference and that “America! F-ck yeah!” money shot in the end had to be intentional. It looked like Treyarch were having a blast making this game. It wasn’t meant to be taken seriously and they certainly weren’t being pretentious about it either. (No more choice quotes from politicians this time around.)

Treyarch brought in new tricks like diving to prone, the ability to “pilot” a helicopter and new toys like the crossbow, but they didn’t make any changes to core game itself. I was still fighting off waves of enemies until I breached a magical barrier. The enemies, be it Vietcong, Russians, Cuban and any other opposing faction, were still behaving like their dim witted ancestors. I’ve given up hope for a A.I. improvements at this point. From now on I’m hoping for competent tech.

After the release of Modern Warfare 2, I thought the days of technical discrepancies between the PlayStation 3 and Xbox 360 platforms were behind us. To be blunt, Black Ops is a four or five steps backwards for the PlayStation 3 version. I’ve already expressed my disappointment,  but to be fair, most of that disappointment was directed to the multiplayer. The resolution and framerate deficiencies didn’t bother me as much within the campaign. I was able to forgive the shortcomings and praise the advancements in facial expressions and dismemberment. The damage inflicted by shotguns were absolutely devastating.

Modern Warfare 2’s soundtrack was the highlight of the show. I replayed the campaign for the soundtrack alone — it was that good. Black Ops soundtrack had only one notable soundtrack during the rooftop chase (yes, this game has one too). Everything else was mostly standard fare. In fact, the audio as a whole needed more punch. The competition — primarily EA’s latest military shooters — have them beat by a wide margin.

For your next trick, how about creating a new engine for this franchise?

For more information on Call of Duty: Black Ops, visit the official site.