I need to get this 2010’s gaming expense post out of the way as soon as possible. I’ve already begun spending money in 2011 and only two days have passed! You can thank Mafia II and Steam — damn you, Steam!

And damn Steam indeed! Just look at this breakdown of my purchases: 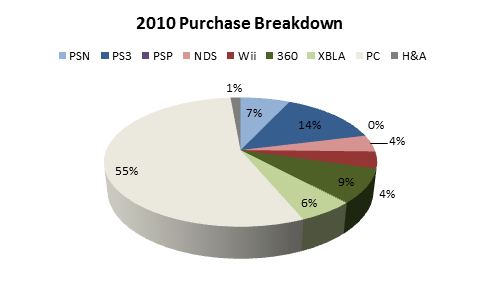 55% of my purchases were for the PC? Crazy. Thanks to digital distribution vendors for their mega sales and complete packs! Keep in mind that I didn’t play that many PC games, but when it’s cheaper to pick up a complete pack of 10+ games for just the one or two that I want: that’s going to ramp up the PC title count.

As for how much I spent during the past year? Here’s the breakdown of that:

Not bad! I’m actually ~$150 under budget. And thanks to patience, gift certificates, trade-in promotions and ridiculous Steam sales I managed to wring out a lot more games for my money. I spent roughly the same amount of money, but I got significantly more for my dollar this year. This year, I got a hold of  70 titles vs 2009’s 21. 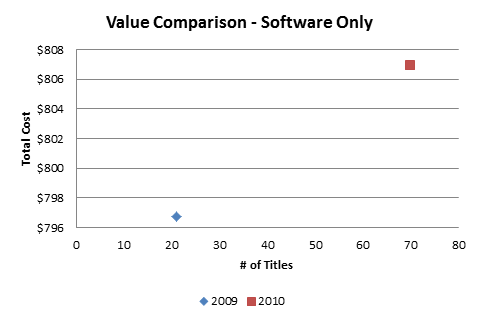 Below is a chart comparing the past two year’s total gaming expenses — hardware and software included. 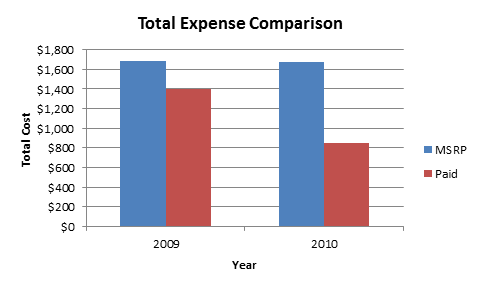 Interestingly, the MSRP value of the past two years were just $10 apart.

Verdict: It Was a Great Year

I spent less and got more. It couldn’t get any better than that.

I’m looking forward to 2011 and seeing how everything will shape up in the graphs at the end of the year. I have feeling it’s going to be quite costly with so many high profile titles launching early in the year and the launch of the Nintendo 3DS.

As for 2011’s gaming budget? I’m going to set it at $1000 again. We’ll see if I can keep it under that magic mark again — especially with the launch of the Nintendo 3DS.

But enough about me. How about everyone else?