I finally got around to playing the first game powered by CryEngine, Crysis: Warhead. (This one didn’t count, remember?) Warhead was a distilled sampling of what made Crysis enjoyable. More firefights involving suit powers and less time spent in silly tanks or ships.

I’ve learned many lessons from my time with Crysis and it seemed like Crytek and its satellite team Crytek Budapest did as well. First off, I played the game in DirectX 9 mode from the beginning. I’m not sure if it was the rendering mode or optimizations made to the engine, but I did not experience the turbulent framerates found in the original. The next technical improvement worth noting was the substantial drop in scripting issues. I only experienced two of them and they went away after reloading the previous save. This may seem sarcastic, but I was genuinely pleased by that.

I was also impressed with the default control scheme for the gamepad. It was actually quite sensible with all things considered. I didn’t have to wrestle with an XML file looking for buttons to re-map. I was really yearning for a weapon wheel though. Cycling through all Psycho’s toys wasn’t ideal in the heat of battle.

I didn’t think playing as Psycho was going to be a big deal, but it turns out that he’s a far more interesting character than generic super soldier Nomad. I guess Psycho could be considered a generic super soldier with a British accent, but at least he had trait of some kind. Plus his default UI was orange which is a bit more aggressive than that green tinge of Nomad’s. It was reflective of how vocal and angry Psycho was during missions.

The timeline of Warhead ran parallel to the campaign of Crysis. Psycho was off on another part of the island doing is own thing in the original, and Warhead revealed what he was up to. It turns out he was partaking in cheesy dialog exchanges and groan worthy dramas. The cutscenes were terrible and whatever they were trying to do with that North Korean military official was pathetic. Narrative wasn’t Crysis’ strong suit and Warhead didn’t do much to rectify it — it may have been a step back even. 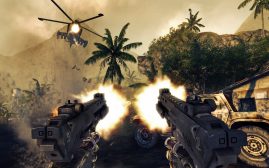 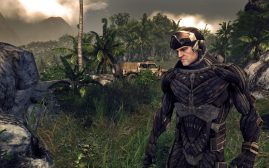 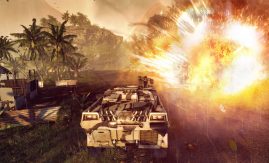 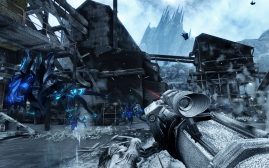 Suit powers! That’s what Crysis was known for and I felt Warhead did better job of exploring different scenarios with them. In Crysis, my go to suit power was cloaking and while it was still my crutch for most of Warhead, there were key instances where hiding in plain sight wasn’t the best tactic at all. Take the train escort mission as an example. There were plenty of turrets on the train, but not much cover. I couldn’t rely on cloak because there was no opportunity to recharge suit energy thanks to the pesky helicopters circling overhead and guard stations the train passed through.

It didn’t take me long to realize that the train was moving quite slow and that I could use it as moving cover. As long as I kept the speed power activated, I could run along side it. I thought that scenario epitomized the unique qualities of the Crysis franchise. But then I also realized I didn’t need to stay with the train and could approach each guard station at my own pace. And so I did.

They were so close to executing a game where suit powers served as an integral part of the game’s mechanics and not just a legitimized cheat code. I could run into the middle of the battlefield with dual submachine guns, but I wouldn’t last more than a few seconds on Delta difficulty. The alternative was to use cloak, climb up onto a roof to pick off clueless enemies who did not know how ladders worked. Where was the middle ground? Why couldn’t I fight more of those North Koreans and their nano suit knock offs? They provided a battle of wits and patience.

Oh well. Perhaps Crysis 2 is where it will all gel together. In the meantime, I guess Crysis: Warhead will just have to do. It’s the closest we’ll get to experience “Maximum game” from Crytek.

Verdict:
Worth a Try

For more information on Crysis: Warhead, visit the official website.