The first Mafia was a real treat for me back in 2002. It was the first “open world” game which I enjoyed and it was also my introduction to the mafia. Italian gangsters, Godfathers, 1930’s music and setting; these were things that were somewhat foreign to me before this game and I loved it all. So when Mafia II was announced, I was hoping for more of what made the original great. 2K Czech delivered, however, it turns out that I should have hoped for more.

My key takeaways from the original game were as follows:

In Mafia II, they continued telling a solid (albeit incredibly cliché) mob story and they improved the driving. The driving went from finicky to enjoyable. Each car had the appropriate sense of weight and heft, but I did not enjoy it that much. I drove a lot, even when it wasn’t my car, I was driving. They even had me driving to cutscenes! I drove to the outskirts of time, watched a cutscene of the main character, Vito, burying some unfortunate dude and then drove my way back home. And that was a main line mission. There weren’t that many missions in Mafia II, so to waste one driving and watching a cutscene was irksome.

The Goodfellas influence continued with Mafia II — or was it just mob movies in general that influenced it? I can’t really tell anymore. I noticed a lot of similarities between the classic Scorsese film and Mafia II, so I wasn’t expecting anything new or enlightening. I pressed forward to see where Vito and his buddy, Joe, were going to end up. Were they destined for witness protection program, prison or death? I knew they were going to end up made men and I knew someone close to them would end up dead at some point, but I liked these guys so it was easy to follow them to the end. 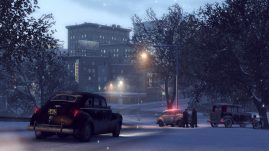 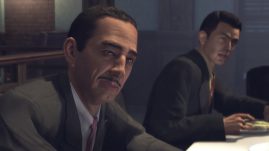 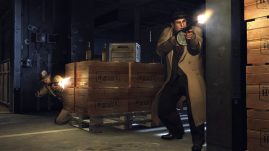 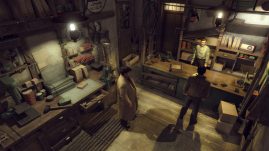 It was good to see 2K didn’t skimp on the voice actors because they were instrumental to the experience. Their fantastic work kept Mafia II moving. I only wished they spoke more during the long rides, it would have made the trips more bearable. They could have also used those opportunities to flesh out the story and the world a bit more.

The chances of a mission ending with a shootout was predictably high. I love shootouts — especially those involving well implemented third person cover systems. If only the firearm feedback was more consistent between weapons. The venerable Tommy gun was fine and so was the pump action shotgun, but pistols, revolvers and many of the other firearms felt like harmless cap guns.

Like its predecessor, Mafia II wasn’t an open world per se. It was a very linear game set in an open world backdrop. Wandering off to do side missions wasn’t an option here. I could veer off the suggested path to pick out some swanky suits, seek out a new gun or trick out my classic 1940’s clunker at a garage. Those were my choices, but they were extremely limited and ultimately negligible.

My appreciation for well produced mob themed games kept me rolling towards the finish line. After the half way point when the transitions in time and scenery were done and over with, the game bogged down significantly and I was finding it tough to keep pace. They did toss out a nice tie in to the original game part way through that slump though. It was a nice gesture, but it also reminded me of the fact that I enjoyed Mafia more. Times have changed and games have progressed to a point where strong narratives and great gameplay can co-exist. I can have both now, so why would I settle for just one?

For more information on Mafia II, visit the official website.