I now understand the grief people gave Mirror’s Edge when it was released back in 2008. It was a title that was packed with ideas, but light on execution.

Mirror’s Edge is original from top to bottom and coming from DICE — who churns out plenty of Battlefield titles — was eye opening. These Swedish developers took Unreal Engine 3.0 and forged a unique and beautiful style. Everything looked so clean and sterile. Colors popped which was important because they were used to direct the flow of the game.

Objects highlighted red were used like arrows, pointing me the right way. Blues and oranges tried to nudge me towards the red “arrow”, but it often failed to do so which meant I ended up pressing the B button which forced me the right way.

The controls took a bit of time and effort to memorize, but they worked — most of the time. I didn’t have any problems when I was free running, but when I entered combat, things quickly fell apart.

Hand to hand fighting felt awkward, clumsy and in desperate need of lock on of some kind. I was also having trouble disarming guards on a consistent basis. If they were wielding anything besides pistols, disarming became roulette. I didn’t know when to press the disarm button despite telltale signs and the slow motion. I don’t normally wish for quick time event button prompts, but I think the game would have benefited tremendously from them. It would have taken the guesswork out and probably result in a more consistent rhythm.

Maintaining momentum was instrumental to the game. It’s also an integral part of free running which Mirror’s Edge sought to simulate. By and large, I felt DICE successfully created the world’s best (and only) first person free running simulator. The sensation of running across rooftops, hopping off ledges and vaulting over ventilation ducts were communicated well and felt tangible. DICE showed enough of the leading lady’s limbs and body to sell the idea of being more than a floating camera moving about. 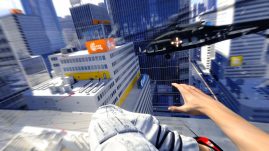 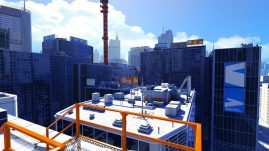 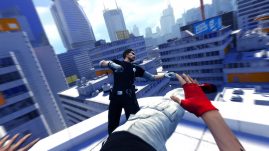 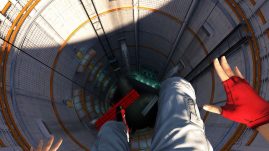 But I do concede to the need for breaks. Faith and I can’t free run for five hours straight. However, I also recognize that the breaks should be fun and meaningful. In the beginning, I tried to play like a pacifist and avoided combat. I quickly realized that wasn’t possible. Then I tried to disarm and disable guards non-lethally; needless to say that didn’t work out so well either. In the end, I had to pick up a gun and take people down. It was very poor experience, to say the least. I couldn’t believe how lame the shooting was. And this was a DICE game.

I resorted to gun violence in order to keep my sanity. I took these little skirmishes as reluctant breaks, but then just before the final chapter rolled along, a puzzle appeared. I was in a construction site and needed to get to the top. There were no ladders, no people or red glowing objects to guide me this time. I had to figure out this puzzle on my own using all the skills I picked up along the way. It was great and I wish there were more of these Tomb Raider-esque platforming puzzles in the game.

Wishing for more, wishing for less and wishing for better; those thoughts floated around my head constantly during my time with Mirror’s Edge. Like I stated earlier, this game had a lot of great ideas that weren’t fully realized or well thought out. But it does have a very solid base to build off of. I can envision an open world game spawning off of this base. It would be like Assassin’s Creed, but in first person. Unfortunately, according to recent rumors, a sequel to Mirror’s Edge is bleak which could mean all of this was for naught.

For more information on Mirror’s Edge, visit the official website.