Miles Edgeworth finally starred in his own game and yet he was unable to escape the torrent of references and cameos from his rival’s game. It seemed like the developers behind Ace Attorney Investigations were worried that folks have forgotten all the characters of the original trilogy. Nearly every supporting character made an appearance and did their shtick.

Some characters even insisted on repeating their trademark actions between chapters. I realize each chapter is supposed to be standalone, but did they need to repeat entire introductions of key characters? Did they really need to continuously remind me of Franziska Von Karma’s relationship with Miles and her obsession to one-up him? Or how about her whipping? All the counts of assault she gets away with is nothing short of amazing. 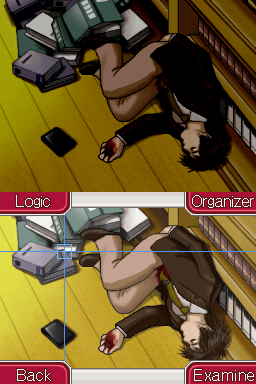 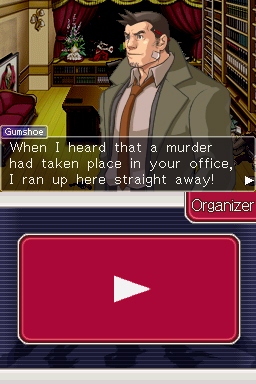 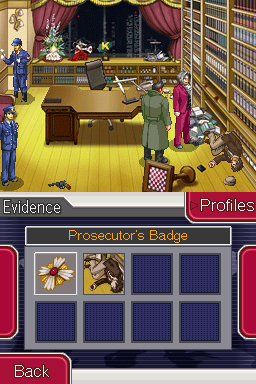 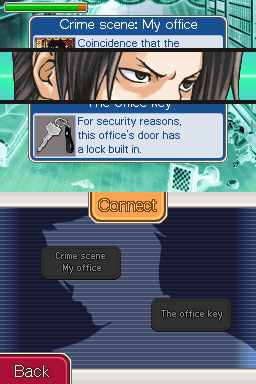 All the repetition hampered the game’s flow, but it also had the nasty side effect of highlighting other repetitive actions in the game itself. The investigation process did not change much, I wandered around looking for clues and gathered evidence. Then I used that evidence and presented it in order to nail the perpetrators. However, unlike the first four Ace Attorney games which came before it, I was actively figuring how crimes were being committed at the crime scene.

The “Logic” mechanic forced Miles and I to unravel the crime as we went along. The actions of suspects were plotted out and revealed to me as I paired ideas and thoughts together. For most of the chapters, I had figured out the crime before the final confrontation. As an investigator, that was satisfying. But then I had to take the “test”. I had to confront the suspect and present all my findings in the form of evidence.

I found that whole process tedious and a bit frustrating at times because I knew how the crimes were committed, but was struggling to find the right evidence to communicate it all. When I did stumble on the right piece of evidence, it was always obscure or the roundabout way of getting to the point.

I liked the main story thread and how it connected all the chapters together. I liked having Kay as a sidekick and Lang as the antagonist. It was too bad there wasn’t enough of either to sustain a good pace throughout the game. I don’t know if they should have lopped off the final confrontations or rip out the Logic component altogether, but something has to go in the sequel. I cannot go through the same repetitive nonsense again. Miles Edgeworth is a prosecutor, so how about a little less CSI and more prosecuting.