Very few sequels have disappointed me in this console generation — and for the most part — Visceral’s Dead Space 2 was no different. It was an improvement over its predecessor in nearly every respect. It plays better, it looks better, it sounds better and it contained even more scares than the first.

I am reminded of God of War II when I look at Dead Space 2. Both sequels took the original’s strengths and refined them to a brilliant shine. They both also jettisoned their predecessor’s weaknesses and replaced them for known winning formulas. As a result of these decisions, what we’re left with is a sequel with few faults, but also one that feels a bit too “safe”.

Dead Space 2 revealed its surprises relatively early on. Isaac Clarke, for one, now has a voice. He’s doing a lot more than grunting when stomping the arms off the dead and he’s also cursing up a storm. I thought giving Isaac a voice would lead to more interesting conversations between characters, but in the end it didn’t make a difference.

It seemed like Isaac was given a voice in order to move the plot along without having two talking heads like in the original. However, for something interesting character developments to happen, Isaac needed to be more than the insane engineer. Unfortunately he wasn’t. Isaac wasn’t breaking down or building up to anything worthwhile. He was simply insane and in denial over his wife’s death.

I felt disconnected from Dead Space 2’s narrative for a majority of the middle chapters because there was very little in the way of tangible developments from both the character and the universe. Anything of worth was, again, revealed in the earlier chapters.

I believe a large part of the disconnect stemmed from the fact that I wasn’t feeling the motivation or urgency behind the game’s objectives.

“Find a way to destroy the Marker”

That was my ultimate goal and it was set in stone. The only mystery behind it was how I was going to accomplish that goal and I felt the game did a poor job handling the ramp up to that. The reason why I tolerated the fetch quests of the original game was because I believed in them. I bought into the reasons behind the ingredients gathering and why I needed to retread areas in order to do so. I felt the sequel lacked these motivational carrots on a stick for a majority of the game.

But on the flip side, I was playing a fine survival horror game.

The station on Saturn’s moon Titan allowed more variety in the environments. It was also closer to home and less sterile. At one point I was fighting off a small army of undead children in a gymnasium. It was surreal and a lot more unsettling than the Ishimura ship. 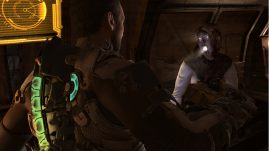 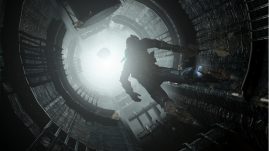 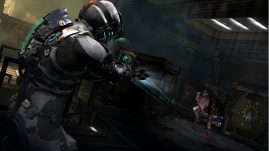 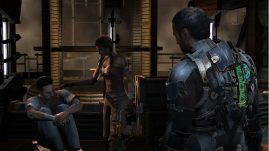 The tech powering Dead Space was impressive in 2008 and would have been impressive now, but the tech team did not rest on their laurels. Dead Space 2 was a smoother and prettier. The lighting, in particular, was the most noticeable improvement with the increased volume of lights and the wide range of uses of it.

I didn’t mind the slow methodical nature of the original game. The game demanded precision and commitment to my actions. In the sequel, the name of the game was crowd control with a bit of a efficiency. Quick reflexes didn’t hurt either.

This was a faster game with more swarming and rushing enemies. Using statis to slow down enemies was no longer a “nice to have” option; it became necessity which was why it automatically refilled a bit after a brief period of time. There was a bit of a puzzle element to some of these fights thanks to the addition of new weapons like the trip mines and the Javelin’s shocking alt fire. I often retried certain battles in order to find a better solution which would get the job done and leave some ammo in my inventory.

It’s a good thing the combat was of a high calibur because the game flowed down a distinct path. The revised free roaming zero G mode usually meant zero G gun fights and puzzle solving; there wasn’t any zero G hoops in this game. In fact I didn’t run into any significant diversions at all. If I wasn’t severing monster limbs, I was moving objects around with my telekinesis abilities and if I was doing neither of those, I was being freaked out by the atmosphere. I almost felt compelled to take a break early on like I did with Amnesia: The Dark Descent, but overcame any anxiety with some aggressive stomping of body parts for ammo.

Dead Space 2 exceeded its predecessor in every respect aside from narrative and fiction building. I felt the original was a tight knit story and game. The sequel, however, fell a bit short on the narrative experience. Some of it could be attributed to the familiarity with the franchise, but since there were all these books, comics and other Dead Space media out there, I was hoping they would have fed some of that extraneous fluff into the flagship game itself. Maybe in Dead Space 3.

In the meantime, I’ll be gearing up for my “New Game +” run and maybe even a hardcore excursion. You know games have come a long way when story is clouding my judgement of an otherwise brilliant survival horror game.

For more information on Dead Space 2, visit the official website.