The best licensed games utilizes the source material to enhance the experience. More often than not, licensed game developers simply use the license as life preserver to keep a mediocre title afloat. Batman: Arkham Asylum was most definitely the former. Rocksteady’s game could stand on its own as a solid stealth action adventure — it’s true. And with all the Batman lore and atmosphere infused into the game, it was elevated to a truly entertaining experience.

Rocksteady dug deep into the Batman universe and exploited it to great effective. Instead of using Gotham City as obvious backdrop, the developers decided on Arkham Island. Some were worried about the limited variety an island may present and since the game follows the “Metroidvania” formula a bit, I was concerned as well. It turns out I was worried for no reason. Rocksteady were not afraid to twist and alter the asylum to reflect the villains of the Batman universe.

The Scarecrow’s mind games stirred memories of Max Payne with its bizarre and disturbing imagery. Stealth was often an option (or a strongly suggested option) throughout the majority of the game except for these mental excursions. In fact, it was one of the rare moments where I was greeted with a game over screen if I was caught. Any other time, Batman could always recover. After all, he does have his trusty grappling hook to bail him out of sticky situations.

Additional gadgets, abilities and enhancements were unlocked as Batman made his way through the asylum. Each ability granted access to previously inaccessible areas; it’s the Metroidvania I spoke of. No, Batman wasn’t searching for Batarang ammo kits to increase the number of Batarangs he could carry. Instead he can use these abilities and his trusty “Detective visor” to find collectibles and capture photos of things the Riddler requested. These little Riddler trophies unlocked extra content such as challenge rooms and provided the Dark Knight experience points which unlocked additional abilities. It was clever of them to have the pretentious nut mock and belittle Batman as he progressed through these collectibles. 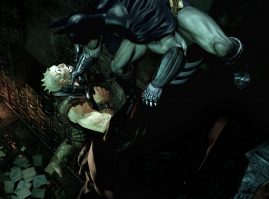 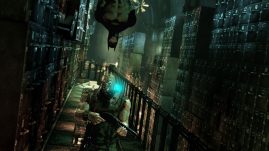 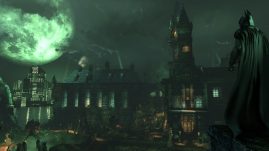 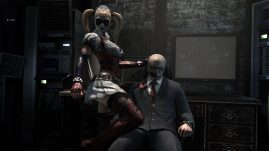 Arkham Asylum acknowledges the importance of Batman’s detective side, but they didn’t delve too deeply into it. They used these investigative moments as breaks between the stealth action and boss fights. They were also used to move the story forward via a bread crumb trail of clues which can only be seen through the “Detective visor”. It’s not the greatest homage to the great detective’s skills, but it’s a nice touch.

It’s not out of the realm of possibility for Batman: Arkham Asylum to be a brawler; I could have mashed the attack button with a high degree of success. However, it’s more about negotiating enemies and their approaches more than the actual fighting itself. I appreciated the fact that thugs will interrupt Batman as he’s in a middle of a streak without hesitation. They’ll break pipes and use them as weapons to knock the caped crusader into a daze. And they have no qualms with the use of firearms whenever possible. Batman has to take into account of all that — I have to take into account of all of that. With a gentle push of the right analog stick, I could direct punish in any direction I needed to and Batman will fluidly maneuver himself into a vicious attack.

The combat played wonderfully. The action is always exciting to watch with slow motion blows to the head emphasized by a thunderous thud. And yet that’s not the most entertaining part of the show. The supporting cast, the Joker and Harley Quinn, livened up the mood with their antics and iconic voice work. Bad puns and verbal jabs against “Bats” always brought a smile to my face. While the story didn’t pan out to anything extraordinary, it still felt very Joker-like; it’s something Batman’s nemesis would do.

My initial impressions with Batman: Arkham Asylum were positive and I’m happy to report that it remained positive throughout the entire game. This is the definitive Batman experience for both new comers and veterans alike. Everything I did in this game felt like Batman. I felt like I was Batman. I heard someone describe Arkham Asylum as “The Dark Knight” of superhero video games and I have to agree. Very few licensed games do their source material justice like Arkham Asylum does; they even included the ridiculous investigative gadgetry the property is known for. And just like with the movie, I’m left wondering how can this be topped? It already seems like played their best hand. That’s just how good it is.