If a game’s quality equates to the number of times I’ve played it, then Uncharted: Drake’s Fortune sits on top of my list of games for this generation. A high caliber sequel would be needed to top that kind of accomplishment. Everything I loved and hated from the original had to be improved or amended. Naughty Dog did all that and more. Uncharted 2: Among Thieves isn’t simply more of the same, but improved. There’s all kinds of sorcery in here which I’ve never seen the likes of — well, not seen in a game at least.

Developers draw inspiration from cinema all the time. Some even borrowed heavily at the cost of gameplay. Uncharted 2 managed to borrow its fair share and infused it into the story and gameplay. As a result, I was no longer simply witnessing harrowing situations, I was playing them. And I wasn’t “playing” via quick time events either. If I wanted to have Drake take out mercenaries as the floor of a building was being decimated by an attack helicopter’s missiles? Naughty Dog enabled me to do so. The results were amazing.

To not acknowledge the tech behind Uncharted 2 would be disregarding one of the key ingredients which elevated this game above the pack. This is the best looking console game of the generation thus far. The art, lighting and tech was all top notch. The standout improvement had to be the animation though. From the emotive and yet subtle facial expressions to the dozens upon dozens of context sensitive animations, these were the little touches which amused me the most. I’m willing to bet that most people won’t notice these little touches, but I did and appreciated the feat.

Diversity and expansion were the trends this time around which inevitably meant more weapons, more enemy types and more exotic locales to visit. I didn’t expect drastic gameplay alterations and thus I was pleasantly surprised by the stealth addition. Admittedly, it was a bit of a worry initially with iffy stealth segments which highlighted how unaware the enemies were. Was this intentional? Perhaps. But I still adored the stealth. Slamming guys against the walls to knock them out or shoving them off a building never got old. And along with the refinements to the combat in general, I suddenly had multiple angles in which to approach a battle. Go in guns blazing? Sneak in? Approach from up high or from the left? The options enabled creativity and offered numerous ways to solve the combat puzzle.

Many folks have finished Uncharted 2 rather quickly and not because of the lack of length. It took me three sessions to wrap up the ten hour campaign, but it was a struggle to pry myself away from each one. The brisk pace kept the plot moving and never settled on anything for too long. To maintain such a series of spectacles and hooks to keep me engaged from beginning to end has to be commended. These plot twists weren’t particularly unexpected, but it was still fun and told in an evocative manner. I don’t know how they did it, but they did. It just goes to show you that you don’t need an original tale to spark interest. 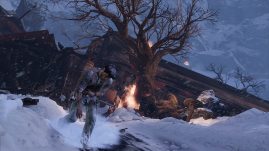 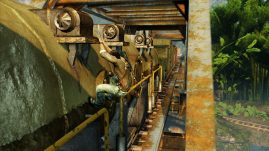 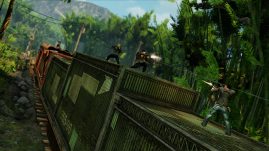 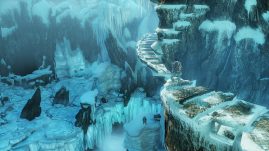 As per usual, puzzles, treasures and platforming offered breathers between the action. However, this time they came clustered together at natural junction points — there were entire chapters dedicated to leaping from perilous ledge to perilous ledge. The puzzles made their way into the platforming and continued the tradition of being easy to decipher. The treasures, on the other hand, returned in full force. I strongly suggest against pursuing them in the first play through as it exposes many of the level design’s weaknesses. If you want to succumb to stupid deaths, go after the treasures.

Stupid deaths marred the first game and to Naughty Dog’s credit, they’ve mitigated the problem significantly with the Uncharted 2. Drake doesn’t reach for a ledge if he can’t make it and they’ve completely abolished any quick time events involving the environment. I suspect many folks will die at the hands of Uncharted 2‘s bosses though. These men can take their share of damage. One of them was given some reasoning for his toughness, but I still do not understand how the other can take so much punishment. I hope Naughty Dog gets rid of the whole concept of bosses for future installments because it isn’t needed in a game like this.

Along with the announcement of stealth, multiplayer was also a point of concern initially. Those concerns were put to rest after I tried out the multiplayer beta back in July. While I find the competitive side of things entertaining, the real gold lies within two co-op modes — Gold Rush mode in particular. Up to three folks taking down waves of enemies while transporting an objective emphasizes teamwork and really ratchets up the tension. The standard co-op scenarios are fairly straight forward affairs and are incredibly difficult to complete at the higher difficult levels — I have yet to complete one on “Crushing” difficulty. But above all else, I was most impressed with how much Naughty Dog has learned from others with regards to multiplayer features. Party mode? Recorded games? Live content updating without patching? It’s all there. Even host migration is in! It’s all very impressive for their first PlayStation 3 multiplayer game!

I’ve played many games. I’ve played games with great voice acting and characterization. I’ve also played games with sharp combat and jaw dropping visuals. But it’s rare to find a game which excels with both and so many other key areas. Whether it’s the audio visual effort, story or the gameplay itself, Uncharted 2: Among Thieves did not disappoint — everything was improved over its predecessor. It may not be absolutely perfect, but taken as a whole, its a grand accomplishment which should not be missed.

It looks like I’ve found my third game to chase a Platinum Trophy for.

For more information on Uncharted 2: Among Thieves, visit the official website.