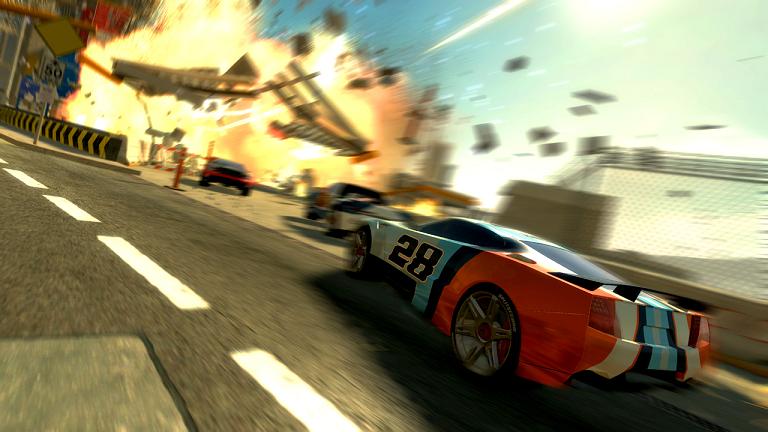 I’m a fan of arcade racers — Wipeout HD being the favorite of the lot. I’ve always wanted to get into four wheel arcade racing, even though I haven’t found much success with that breed of arcade racer. Burnout: Paradise could have fit the bill, but I wasn’t feeling it after the demo. (I realize the game has changed dramatically since then, but then I haven’t gotten around to trying the latest iteration.) Fortunately, there are more arcade racers coming this month via Bizarre Creation’s Blur and Blackrock Studio’s Split Second. I checked out the demo for the latter.

I dug the demo of  Blackrock Studio’s previous work, Pure. It looked, played and ran superbly. It was also quite exhilarating for its vertigo. Split Second isn’t about vertigo or speed for that matter — it’s about explosions. Like a Michael Bay movie. I drifted and drafted my way around a simple track building up power charges in order to trigger predetermined explosions. These triggered on-track explosions can than be used to wreck my opponents or alter the layout of the track.

When I first learned of this mechanic, I thought it was going to be awesome the first time through, but would gradually become repetitive and predictable with each passing race. It turns out I was right. After trying the demo three times, I was already seeing past the explosions and into the simple racer.

Like the gameplay itself, I was initially wowed by Split Second‘s visuals. After spending a bit of time with the demo, I began to see the faults in the visuals. Aliasing was a bit distracting and so were the lower resolution textures on the track’s assets. To sum up: Split Second just didn’t hold up to closer scrutiny.

Now let’s see if a Blur demo will show up.