I got my hands on that Blue Planet Electronic power meter I mentioned last week on Twitter. I initially wanted to pick it up to measure how much power (if any) I would be saving if I switched my PlayStation 3 to the APS-231 power supply. But after those damn Chinese Ebay shops sent me a poor excuse for a used power supply, I held off until earlier this week when I decided to start this Home Server Project thing. After encountering some snags, I actually got Amahi working which meant I could do some power consumption measurements.

And here are the results at idle: 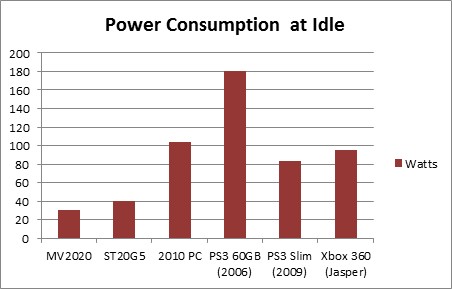 Measurements were taken shortly after boot up of the system. I waited until the system was completely idle and waited for the power reading to stabilize at a number for more than 10 seconds.

I actually measured the Shuttle ST20G5 first. I actually thought it was wrong and proceeded to test the PlayStation 3 which I used as a baseline thanks to “professional” measurements. It turns out that my measurements were in line. So what does this all mean?