I actually forgot about 2011’s gaming expenses until I started buying a couple of games earlier last week. (Ico & Shadow of the Colossus Collection and Chrono Trigger DS, if you’re curious).

Like with last year’s post, I’ll start with the purchase breakdowns by quantity, but unlike last year, I’ve also included a chart that breaks down my purchases by dollar value as well. 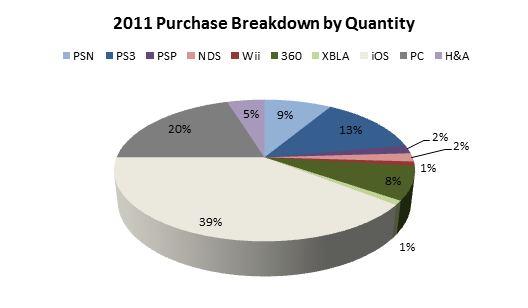 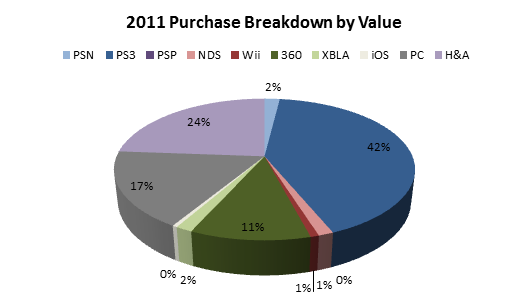 For someone who doesn’t own an iOS device, I downloaded a lot of iOS applications last year — 41 to be exact. But when I look at the amount of money I spent towards iOS, it’s virtually 0% because there were a lot of free iOS apps.

The most alarming stat is the PS3 percentage which states that 42% of the money I spent went into only 13% of the number of titles for the year. I blame my impatience with titles like Portal 2, Marvel vs Capcom 3 and inFamous 2 which were purchased closer to the MSRP than I would like. 2012 will be much different thanks to one of 2011’s deals of the year. 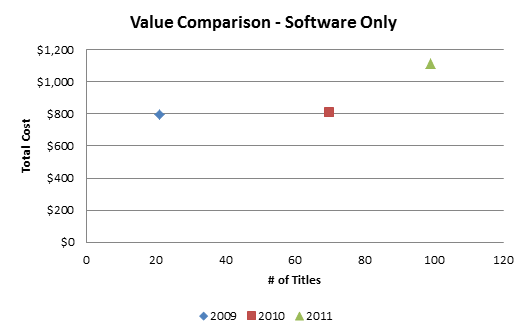 This year offered a lot of freebies and thus the value comparison appears favorable. If I factored out the free apps and PSN downloads, it would be closer to 2010’s numbers. 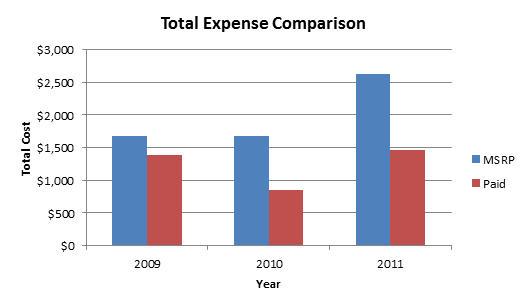 I busted my annual gaming expense goal of $1000 once again — this time by $460. I lay the blame on the hardware & accessories that I picked up this year including another PlayStation 3 and that $60 SNK Neo Geo controller for the PS3. My software only expenditures are only $1112 which is still over the $1000 limit, but not by that much.

Verdict: It was an okay year

I enjoyed all the freebies, but I didn’t like how I spending money earlier in the year.

This year I won’t be investing in any new hardware unless the PlayStation Vita drops below $200 taxes included and I’m far too used to paying less than $39.99 before taxes for new games, so I think a budget of $1000 is attainable this year.

What about everyone else out there?