The fourth installment of the original stealth action franchise brings the legendary hero’s saga to an end. As a fan who loves this series, Metal Gear Solid 4: Guns of the Patriots is my most anticipated game of the year and quite possibly, ever. I purchased a PlayStation 3 for this game. In fact, you could say I assembled my entire home entertainment system in preparation for Snake’s final mission. The expectations are high with the folks at Sony, Konami, loyal followers and critics alike anticipating nothing, but the best from Kojima Productions. I don’t know if it rocked the sales charts or silenced the critics, but I do know it spoke to me and delivered an extremely satisfying gaming experience. 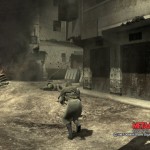 Metal Gear Solid 4 waits for no one. In an age of hand holding tutorials and first class player integration, Kojima expects the player to be well versed with its controls, its ways and its rules. And I’m strictly talking about gameplay. Kojima expects gamers to read the manual, pester Otacon about features and learn things on their own. It’s archaic by comparison, but it’s a sign of how unwavering this game’s vision and focus is – it’s built for the fans.

The first act blares out loud and clear that this is not your typical Metal Gear Solid game. It’s not the Octocamo and its texture copying ability that made it so different – new features are to be expected. It’s the initial pacing and the fact that Old Snake got his hands on an AK102 assault rifle so very early. As a street battle of artillery, soldiers and armored personnel carriers serves as the backdrop, Old Snake is given the task of rendezvousing with the Mark II, Otacon’s remote controlled mini-Metal Gear equipped with cloaking and tasing abilities. Once met, the Mark II hands over the final piece of Old Snake’s arsenal, the Solid Eye, an invaluable multifaceted optical device capable of optical zoom and night vision. Then the action continues. 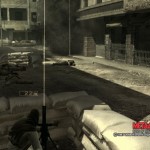 By bringing action to the forefront, I found it difficult to resist the charms of fighting along the local militia. I could completely ignore them if I so desired, but assisting them made my life easier as well. Before long, I’m face to face with the showman and arms launderer, Drebin. He gives Old Snake access to an exorbitant amount of customizable weapons (over 70) in exchange for Drebin points, the currency given when turning in extra equipment and weapons found on the field. With all those guns and a reason to shoot people, why wouldn’t I take a few PMCs out? The control scheme transformation MGS4 underwent made firefights a lot more feasible. Bringing back the free roaming camera of MGS3: Subsistence, locking in an over the shoulder vantage point and simply retooling the Metal Gear Solid control scheme made life a lot easier for Old Snake and myself. Goodbye to the days of trading complexity for function and welcome the era of simplicity and function. 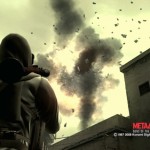 High action dominated the first couple of acts of MGS4 and not even the 1 – 3 minute inter-act installs could take away from the buzz. However, like with all highs, there will be a somber moment to reflect and contemplate. No stranger to the series, well made cutscenes play out the dramas and stories that I’ve grown to love, care and immerse myself in. I didn’t sit with a stopwatch on hand, but I don’t believe a single cutscene breaks the 30 minute mark. I could be wrong, but since I had genuine interest in what the characters had to say, the length of them didn’t phase me. Fortunately, after such gameplay droughts, memorable set pieces were then offered as if Kojima was saying: “Sorry, for making you wait so long.”.

Even if I wasn’t emotionally invested into these characters, I wasn’t left bored holding onto the controller with drool seeping from the mouth — there were things to fiddle and tinker with. Opportunities to initiate flashback slideshows and alternate camera views gave some level of interaction to these amazingly rendered story sequences. Instead of solely relying on the codec system to brief Old Snake, mission briefings were also conducted upon the Nomad, a flying command center of Otacon’s. These briefing moments reminded me of Half-Life 2’s ‘cutscenes’ where I could explore and see how the occupants lived – I found worthwhile items for Old Snake during these exploits as well.

Acts segregated MGS4 into pockets of gameplay experiences, each distinguished greatly from one another. Every act took place in a different part of the world and each delivered a different stealth gameplay style. As expected, not every act allowed the same amount of freedom shown in the 15 minute gameplay demonstration. Eventually the espionage focused segments returned with both familiar and new (for the series) stealth concepts. I thoroughly enjoyed the stealthier segments, however I know some will find it to be a jarring change of gears.

The flow of MGS4 differentiates itself from its predecessors not only through the separation into acts, but also through the lack of repetition. I also never retread ground due to the red beacon on the map beckoning me to move forward. Constant forward momentum and the lack of backtracking brewed an insatiable desire of more since I was not used to seeing areas just once in a Metal Gear game. Thankfully, in true Kojima Productions fashion, it’s impossible to catch all the nuisances and details with one pass through. It’s also no secret that the game becomes significantly different with each difficulty level. More enemies roam the battlefields, the enemy’s senses are heightened and the clamp down on certain items remove a lot of that ease and replaces it with mind numbing tension. It sounds masochistic, but I’m a sucker for it. 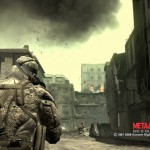 Within the first few hours, I was completely entranced and mesmerized by MGS4’s production quality. It’s several steps higher than anything I’ve ever played. Even if you find the game to be complete drivel, it’s arguably the best looking and sounding game of this generation thus far. Despite being natively rendered in 1024 x 768 resolution (with a dash of anti-aliasing), Kojima casts aside its relevance and somehow manages to pull off jaw dropping visuals. The screen captures don’t do the game justice at all. Keeping to MGS tradition, the cutscenes were rendered beautifully in-engine. Crafting each of the Beauty and the Beast Corps members after real-life models yielded astounding results. Similar level of quality model work made its way across to Old Snake, Otacon, the adorable Sunny and just about everything else in the game world. The entire MGS4 visage just seemed right to me. It was never overwhelming or foreboding and yet somehow manages to “wow” me. The subtle and well thought out use of filters and motion blur also did wonders for the overall image. The framerate floats between 30 and 60 frames per second and the textures do come off as a bit hideous up close, but as a whole: MGS4 is a pleasure to look at. I would go as far as saying it’s the best looking next-gen game simply for its great sense of artistic direction.

It may not be the most attractive rendition of Snake’s voice, but I was sold on David Hayter’s old man vocal work. He and all the voice actors of previous Metal Gear games reprised their roles. Some of their voices were altered slightly to accompany age, while others were inexplicably changed. I liked Naomi’s original rendition in Metal Gear Solid a bit more than her accent-less one now. However, it’s not the voice work which I wish to highlight; it’s the ambience, the positioning and the accuracy of the sound work. Kojima put that Dolby Digital 5.1 to great use. Like the visuals, it’s never in your face, or in this case in your ears, trying to make itself known. It’s most impressive when it naturally blends itself into overall atmosphere. And the soundtrack? It’s definitely up to snuff. Harry-Gregson Williams, Nobuko Toda and the other talented folks in charge of the soundtrack knew exactly how to punctuate the tense situations and tug at heart strings for the emotional ones.

When the credits rolled, I felt that Kojima completed the saga, tied up the loose ends and wrapped up everything in a bow. You’re committing some gaming sin if you take on MGS4 without experiencing its past. Hell, even Metal Gear Solid: Portable Ops for the PSP has some relevance in MGS4. If the MGS storyline hasn’t piqued your interest in the past, I’d consider passing on this. The narrative is an integral part to the Metal Gear experience. Even the excellent GameTrailer retrospectives cannot properly prepare you for the musical cues, the gameplay references and all the other nostalgic bits that can only be experienced firsthand. 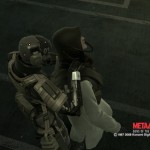 Finally, the finer things within a Metal Gear game. The countless easter eggs stowed away in offbeat paths and the hidden reactions of NPCs to various items and stimuli are largely what makes it Metal Gear. Finding the hidden Metal Gear tracks for my in-game iPod (complete with click wheel), watching Old Snake vomit after too many unnecessary ‘murders’ and listening to Otacon talk to you via the a Bluetooth headset if you have one on – it may be minor details, but it’s all there waiting for someone to unearth. It’s simply remarkable how much detail they packed into this game visually and aurally.

Games have certainly changed over the past 20 years. They’ve been streamlined, focus tested and mass marketed. It’s rare to find a game with a seemingly uncompromising vision. The fans will undoubtedly find the Metal Gear Solid 4 experience to be evocative, enlightening and entertaining like I did, but what about everyone else? The production values are certainly something everyone can enjoy and the same thing could be said about the action. The puzzle-like boss fights, the stealth, lengthy cutscenes and the closed quarters combat on the other hand aren’t things you find in most games these days. These are some of the characteristics that make Metal Gear Solid 4: Guns of the Patriots a must play. It’s a game which by all accounts shouldn’t/couldn’t be made in an age like this. The amount of dedication, work and effort put into this game is clearly evident and a rarity for today’s gaming landscape. Don’t play this game just because you want to shoot things. It’s not for that. Play this game because you want to see the end of Snake’s tale. And play it because you want to experience one the greatest pieces of interactive entertainment ever.

P.S – If you’re wondering about thoughts on multiplayer component, Metal Gear Online, feel free to read my preview impressions here and here. I’ll be posting a review of the final product sometime in the coming weeks.