I did not find Assassin’s Creed to be the ideal first step for the franchise. With it, and the subsequent release of Far Cry 2, I was weary with how Ubisoft Montreal developed their open world games. Their games had solid core mechanics, but were far too repetitive and stale after the first three hours.

With that notion, I wasn’t going to give Assassin’s Creed II the time of day. But when I heard the assurances that it was an improvement over its predecessor, how could I resist? Especially when I could nab a copy for a mere $29.99. Low risk, high praise. This was going to be an awesome deal or another year where Ubisoft wastes my time.

First impressions were worrisome as the introductory cutscenes did not showcase the game’s good side at all. These cutscenes appeared shoddy with poor character models and filled with distracting tiny screen tears. And since I just came from a game with brilliant cutscenes, I was used to seeing them as an examples of the game engine’s power. Fortunately, I was wrong and the engine’s strength lied within the open world cityscapes and not up close and personal. The cities of Italy were beautiful, smooth and free from those screen tears which plagued the cinematics. A curious outcome since it’s usually the other way around.

Unlike with Ubisoft’s previous open world games, each of Assassin’s Creed II‘s cities and townships had defining characteristics. Whether it was the myriad of waterways flowing through Venice or the flooded marshlands surrounding Forli, it was definitely more appealing than a simple palette swap.

These differences also affected how I (and Ezio Auditore) navigated and interacted throughout the world. Race events were available in every township, but each city had its own twist to the basic formula. Horseback riding was more prevalent in Forli while the avoidance untimely dives into waterways was the key to success in Venice. Even though water isn’t instant death as it was in Assassin’s Creed, it’s still something to be avoided in nearly every case since it left me vulnerable with limited recovery options.

In this chapter of the Assassin’s Creed series, Desmond Miles was “reliving” the life of Ezio Auditore, a middle class teenage Italian turned assassin. Ezio’s revenge story was straightforward; his family was murdered by The Templars and the once oblivious son was now in the thick of the overarching conspiracy. This is the same conspiracy which Desmond and the rest of the modern day assassins were trying to unravel — and if I’m honest — its the sole reason for pushing forward. The conspirators take on history fascinated me and drove me to uncover at least one of the game’s many collectibles known only as “The Truth”. Everything else, including Ezio’s own tale, was tertiary. 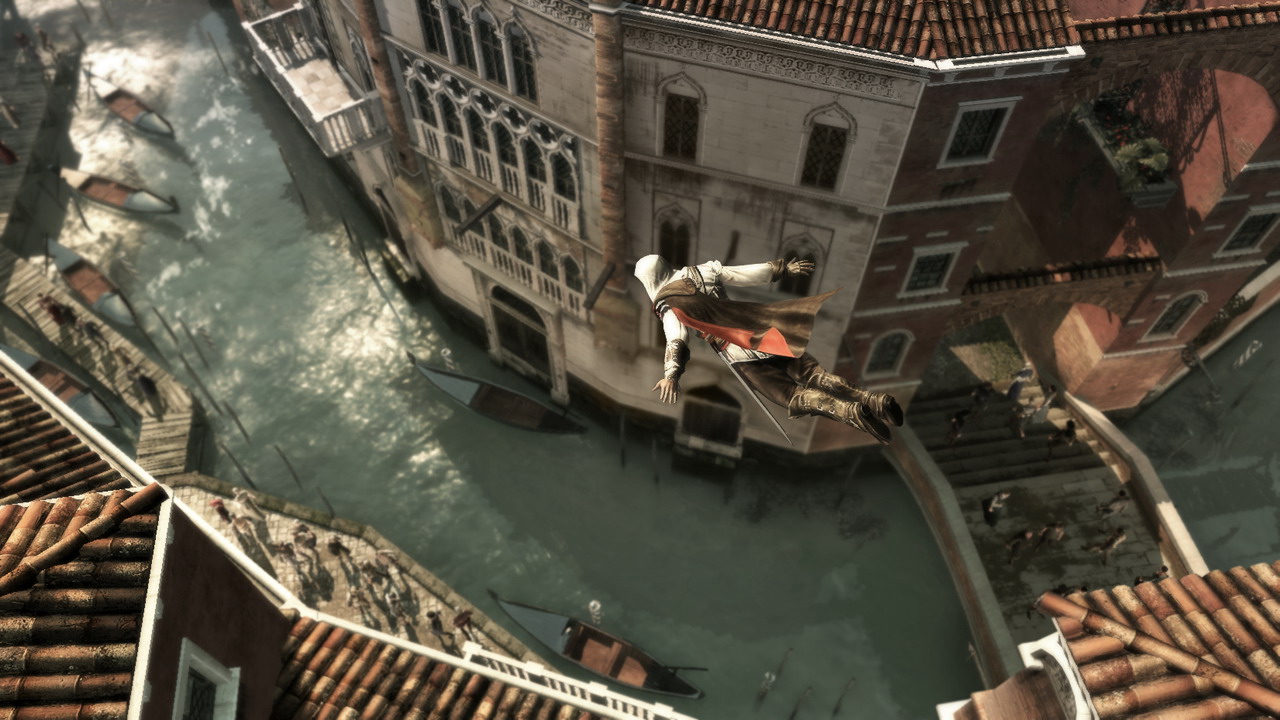 Variety (or lack thereof) was Assassin’s Creed‘s weakness; the setup leading to an assassination was always the same. The sequel remedied this problem by limiting player options and delivering more guided executions. Some required the utmost care while others allowed Ezio and myself the freedom to do anything we wanted. Each target was built up as real bastard of a man whom I’d want to rub out. It’s this kind of context which was so paper thin in the first one that I ended up not caring who I was disposing of.

I wish I could say the free roaming and controls were as refined and improved as the rest of the game, but they’re not. They’re serviceable at best and janky at worst. If I was running around from rooftop to rooftop or scaling a tower to synchronize with a “Viewpoint”, it was fine. But when I was asked to make precise jumps and turns while under the pressure of time? Things fell apart rather quickly. I blamed Ezio’s slow response. I asked for a turn or a jump in a particular direction, but he was too busy executing the previous action to register it. The end result was a smooth moving Ezio at the sacrifice of pinpoint precision; the exact opposite of what Infamous did and one I wished Ubisoft followed. When I came to terms with what the developer’s decision and took my time, I was able to finish the obstacle courses and races without much fuss. It wasn’t always easy to slowdown, but I had no other choice. As for the combat? It’s more or less identical to the original; still counter based.

What makes Assassin’s Creed II (and all good open world games) work is the sense of scale, variety and progression. This game executed well on all of that including the last point which the original was devoid of. Ezio grew as a person and as an assassin with expanded skill sets. His home villa underwent a radical transformation thanks to the funds he invested into it. There was even a day and night cycle which altered the game’s enemy and NPC layout slightly. Although I would have liked to have seen the cities grow and change with the seasons, I was content with what was offered.

The assurances were not unfounded; Assassin’s Creed II was an improvement over its predecessor overall. Its greatest criticisms were addressed making this second outing game the game they should have put forth in the first place. It’s not without its flaws though. The finicky controls was a bother during pressure situations and combat could have stepped beyond the counter system. But when I’m throwing guards off rooftops, skipping across rooftops and wooden beams or soaring through the Venetian sky in Leonardo aa Vinci’s flying machine, I think to myself: